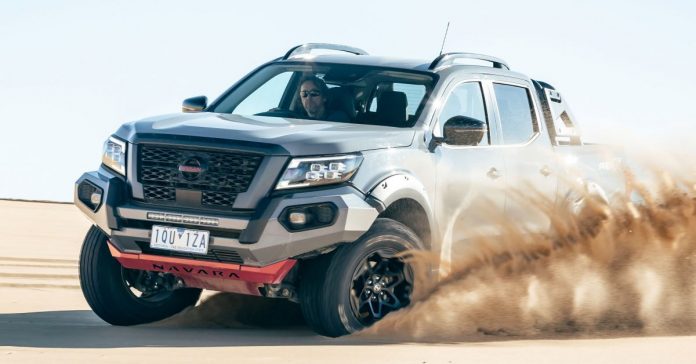 Nissan has launched an even more rugged version of its Navara pick-up truck, which will be sold exclusively in Australia. Previously revealed as the Navara Pro-4X Warrior, the new range-topper is described as being “tailor-made for Australia and Australian conditions.”

Developed in collaboration with local outfit Premcar, which was also involved with the N-Trek Warrior variant of the previous Navara, the new model gets plenty of modification to make it a suitable vehicle to tackle challenging, unpaved paths.

“We set out to create the world’s toughest Navara, and that’s exactly what we’ve achieved with this new Warrior. This needed to be a vehicle that customers will enjoy on and off the road, delivering comfort and capability no matter the conditions, all while expanding the robustness of the Navara, and enhancing its go-anywhere toughness. The result is a Warrior that’s tougher, safer and smarter, but no less practical and capable,” said Bernie Quinn, director at Premcar Engineering. While the engine is unchanged, the rest of the Warrior receives significant changes, including an increase in ground clearance by 40 mm to 260 mm. This alone sees the approach angle rise to 36 degrees from 32 degrees, while the departure angle is slightly more at 19.8 degrees instead of 19 degrees.

Adding to this is a winch-compatible, body-coloured bull bar with an integrated light bar, while a red-painted bash plate and a three-mm steel second-stage protection plate protects the underbelly of the pick-up truck. New 17-inch wheels are also fitted, paired with wider 275/70 Cooper Discoverer AT3 tyres, both housed within prominent fender flares that adds 30 mm to the overall track.

Nissan says the tougher rubber offers increased tread depth, which is useful on off-road excursions, while keeping road noise in check. Other additions include a Warrior decal package, a modified towbar and embroidered headrests for the interior.

The looks are matched with a revised suspension setup that not only raises the ride height, but also provides a more compliant ride and better handling whether on- or off-road. Changes include new springs rates that promote more front-end support and less body roll, while the front dampers are tuned for low-speed damping for increased road isolation and ride comfort.

The Warrior gets increased high-speed rebound and compression rates at the front by around 50% and 100% respectively to deliver greater control of the wheel as well as to prevent bottoming or topping out over larger impacts.

The rear dampers’ low-speed control also gets a bump up to reduce float when towing or carrying a load in the bed. Rebound damping in the rear also gets increased by more than 50% to improve handling stability, while compression damping has also been improved.

The newly-added jounce bumper is another modification on the Warrior, as it is not only larger and taller, but also engages the chassis rail earlier in the suspension travel. This delivers a more progressive rate when controlled the wheel movement at maximum suspension travel.

Rugby: Rugby-Springbok flanker in doubt for All Blacks clash after citing

Venezuela says IMF has not delivered COVID-19 funds amid dispute

‘SPF contouring’ returns as a beauty trend, but its safety comes into question