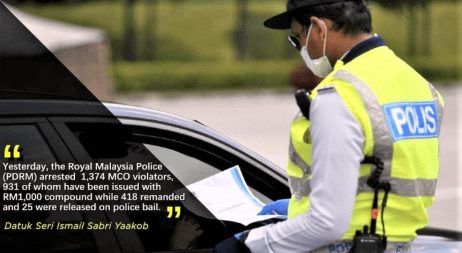 PUTRAJAYA: Beginning tomorrow, those who violate the Movement Control Order (MCO) which enters its third phase will no longer be issued with compound notice by police, but instead, they will be arrested and charged in court.

Senior Minister (Security Cluster) Datuk Seri Ismail Sabri Yaakob said as of yesterday, the cumulative number of those arrested for defying MCO stood at 9,090 and the total compounds issued were at 4,036.

“Yesterday, the Royal Malaysia Police (PDRM) arrested 1,374 MCO violators, 931 of whom have been issued with RM1,000 compound while 418 remanded and 25 were released on police bail,” he said in the MCO daily new conference here today. – Bernama