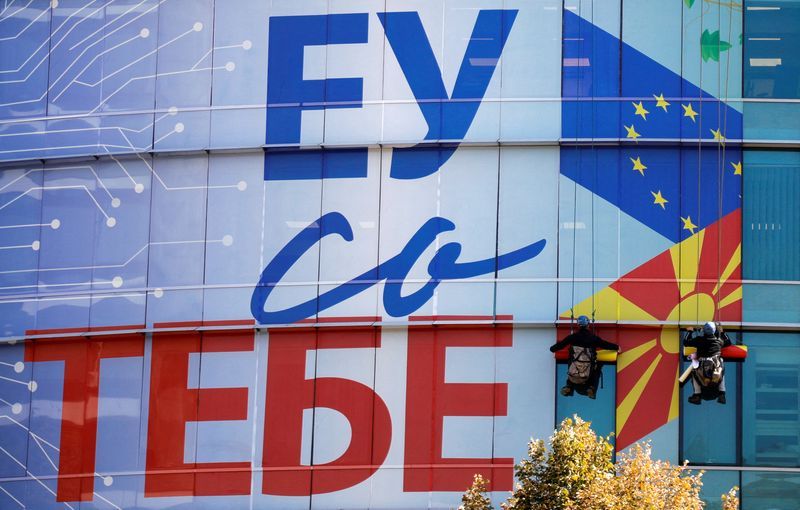 SKOPJE (Reuters) – The new premiers of Bulgaria and North Macedonia agreed on Tuesday to strive to overcome issues that prompted Sofia to block the beginning of accession talks between the European Union and Skopje.

Dimitar Kovacevski, who was sworn in as North Macedonia’s prime minister on Monday, stated he and Bulgarian Prime Minister Kiril Petkov had agreed at talks in Skopje to strive to enhance relations between their international locations.

Petkov, who took workplace final month, stated he was “an enormous optimist” concerning the probabilities of them reaching outcomes.

Bulgaria refused in 2020 to approve the EU’s membership negotiation framework for North Macedonia due to disputes over historical past and language, however faces stress from its Western allies within the EU https://www.reuters.com/world/europe/eu-states-reassert-membership-promise-six-balkan-states-2021-12-14 to be extra versatile.

“I begin my first working day because the prime minister with one of the vital necessary issues for North Macedonia, and that’s studying about circumstances for our speedy progress in the direction of European integration,” Kovacevski stated after Tuesday’s talks.

“With colleague Petkov, we agreed to use this new vitality and … enhance the relations between the 2 international locations.”

Bulgaria’s consultative nationwide safety council, which incorporates all main political events and different senior officers, has agreed the federal government ought to search a breakthrough however not on the expense of nationwide pursuits or the rights of Bulgarians in North Macedonia.

“Today I’m an enormous optimist for our joint motion and I imagine that the outcomes you’ll all see will likely be coming each week, and I hope that what every of the international locations hopes to occur in the long run, we could have because of this very quickly,” he stated.

The EU is by far the largest international investor and commerce associate of the six international locations that emerged from the break-up of Yugoslavia and the ethnic wars of the Nineteen Nineties.

(Reporting by Fatos Bytyci in Skopje and Tsvetelia Tsolova in Sofia; Additional reporting and writing by Daria Sito-Sucic in Sarajevo; Editing by Timothy Heritage)