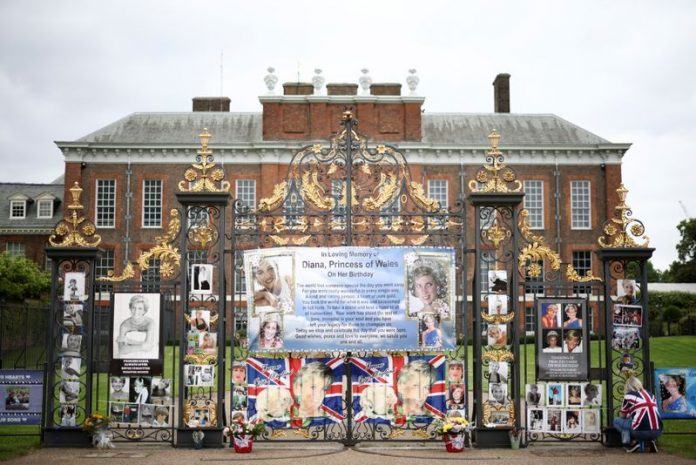 LONDON (Reuters) – British Princes William and Harry will put their differences aside on Thursday to unveil a statue to their late mother Princess Diana on what would have been her 60th birthday.

The statue in honour of Diana, who was killed in a Paris car crash in 1997, will be revealed in the Sunken Garden of Kensington Palace in central London, her former home.

The buildup to the event has been the subject of intense media focus, with the brothers barely speaking to each other after a public falling out.

“I think it’s going be very awkward,” royal commentator Penny Junor told Reuters. “They will put on a show because the cameras will be there, but neither of them is very good at hiding their emotions.”

William was 15 and Harry 12 when the limousine carrying their mother and her lover Dodi al-Fayed crashed in a tunnel in Paris as it sped away from chasing photographers.

Both brothers have spoken of the deep trauma the loss caused, and how it affected their mental health for years afterwards.

In 2017, they commissioned the statue to mark her legacy and life, eventually selecting sculptor Ian Rank-Broadley, whose effigy of Queen Elizabeth has been used on British and Commonwealth coinage, as its designer.

It will be unveiled at what officials describe as a small event attended by a select group of attendees including the princes and Diana’s close family at Kensington Palace, where William, 39, now lives with his family.

Harry, 36, also used to live at the palace, but his home is now in California after he and his American wife Meghan stepped down from official royal duties last year.

He has since launched some barbed attacks on his family and the royal institutions, including an accusation of racism he and Meghan made in an interview with U.S. chat show host Oprah Winfrey, which media reports say has infuriated his brother.

The brothers last saw each other in April at the funeral of their grandfather Prince Philip, the queen’s husband of more than 70 years, after which they are reported to have argued.

What does unite them is grief for their mother, who became a household name around the world after her marriage to heir to the throne Prince Charles in 1981.

The subsequent collapse of their relationship was played out in the full glare of the media spotlight, further captivating the public.

Almost a quarter of a century since the fatal crash, her life and death are still a regular feature in British newspapers.

The statue will be the second memorial to Diana in London, after a 210-metre (689-foot) long fountain was unveiled in Hyde Park in 2004 after years of bureaucratic wrangling and squabbling over the design.

Ukraine crisis: Putin says he does not want war in Europe