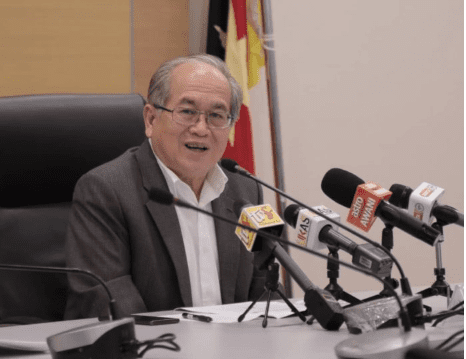 The case involved a man aged 69, who fell ill on April 3 and was admitted to the Sarawak General Hospital (SGH) on April 6. The case sample on April 7 tested positive for Covid-19.

“This case had comorbidities and passed away on April 21 at 2.28am. He did not have a history of contact with any positive Covid-19 cases identified so far,” said State Disaster Management Committee (SDMC) chairman Datuk Amar Douglas Uggah Embas.

He was speaking at the Covid-19 daily update press conference at Wisma Bapa Malaysia here yesterday.

Meanwhile, Uggah added 22 more new positive Covid-19 cases were recorded yesterday, bringing the total number of cases in the state to 436 since the first positive case was reported on March 13.

“All 22 cases are being treated at SGH,” he said, adding that for current cases, SGH was treating 98; Sibu Hospital, 14; Bintulu Hospital, eight; and Miri Hospital, 18.

“Another 20 positive cases have recovered and were discharged from the hospital, bringing the total to 88,” he said.

Uggah revealed that the positive case incidence rate per 100,000 Sarawakians yesterday was 13.7 per cent.

According to Uggah, the public’s compliance with the movement control order (MCO) was 97 per cent.

On Sarawakians returning from overseas, West Malaysia, Sabah, and Labuan, he said that   64 more new persons under surveillance (PUS) were checked into hotels.

“This brings the total to 1,270 people who have been quarantined at 17 hotels all over Sarawak, while 288 have completed their quarantine period and were allowed to go home,” he said.

BTS on Gaining Respect in the US: ‘We Definitely Feel That’

James Comey: ex-Trump adviser Steve Bannon ‘in a world of trouble’ | US news