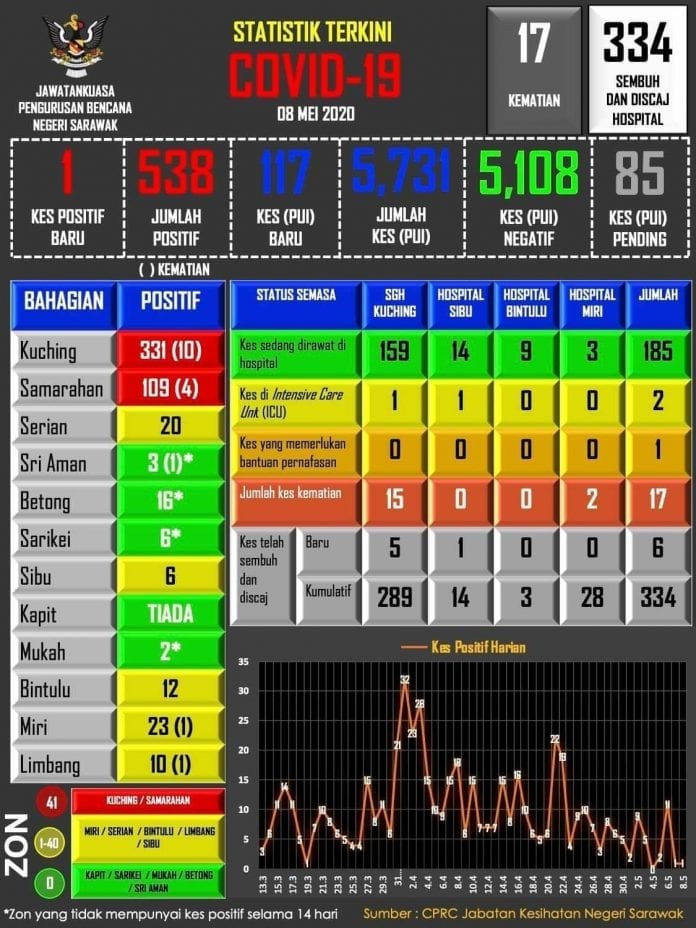 KUCHING: Sarawak recorded one positive Covid-19 case yesterday, bringing the total number to 538 since the first case was reported on March 13.

Sarawak Disaster Management Committee (SDMC) revealed that the case was from Kuching.

“Meanwhile, six cases have recovered and discharged from hospitals. From the six cases, five were from Sarawak General Hospital (SGH) and one from Sibu Hospital.

“From the total number of positive cases, 62.08 percent or 334 cases had recovered and returned to their respective homes,” it said in a statement yesterday.

Apart from that, the number of person under investigation (PUI) cases reported yesterday was 117, and the total number of PUIs awaiting laboratory results is 85.

On Sarawakians returning from overseas, Malaya, Sabah and Labuan, a total of 370 new person under surveillance (PUS) had checked into hotels yesterday, while 174 PUS had completed their quarantine period and were allowed to return to their respective homes.

Additionally, State Health Department has revealed that there are 185 cases undergoing treatment in hospitals so far namely, SGH (159), Sibu Hospital (14), Bintulu Hospital (9) and Miri Hospital (3). Another two cases are treated in the intensive care unit (ICU).

It also revealed that to date, there are 17 re-tested positive cases. They are eight in SGH, seven in Sibu Hospital and two in Bintulu Hospital.

No need to wear face mask while jogging, driving alone