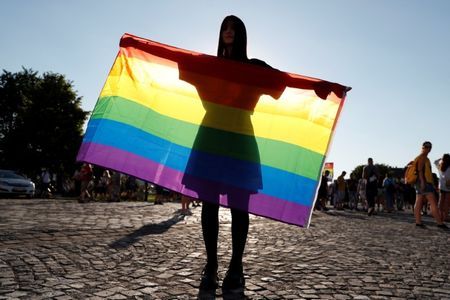 BUDAPEST (Reuters) – Daniella Milla Tokodi says she feels finally free as she dances in spectacular costumes in a drag queen show at a Budapest bar popular with the lesbian, gay, bisexual and transgender (LGBT) community.

The 31-year old Hungarian said she had known she was gay from when she was a young boy. Following final surgery in 2018 transforming her from a man to a woman, she said she broke into tears when she saw herself in the mirror and finally felt happy in her “soul and body”.

“It was a relief … Since then I am able to look into people’s eyes. I can communicate with people, I feel whole.”

That feeling is now overshadowed by worry over a string of laws passed by Prime Minister Viktor Orban’s right-wing government that critics say undermine LGBT+ rights, with the latest this week that bans the “display and promotion” of homosexuality and gender change among under-18s, in schools and in the media.

It follows another law last year banning gender change in identity documents, something Daniella was able to do after she started her transition in 2014.

“I am obviously concerned by it and how the next generation will grow up. It is not by chance that there are a lot of gay, transgender suicides because if someone cannot become fulfilled what can they do? Should they hide?,” Daniella said.

A survey of 2,000 people by the HATTER society, a Hungarian LGBT+ group, showed that 42% thought about suicide while 30% had attempted it. Suicide thoughts occurred mostly among teenagers, about 64% of respondents, it said.

Orban defended the new legislation on Thursday, writing on his website in English that it “does not conflict with any lofty ideals or European laws. The new Hungarian law simply states clearly that only parents can decide on the sexual education of their children”.

His critics say Orban, who faces an election next year, has grown increasingly radical on social policy, railing against LGBTQ+ people and immigrants, which has deeply divided Hungarians and upset the LGBT+ community.

The move, which critics say wrongly conflates paedophilia with LGBT+ issues, prompted a mass rally on Monday, while rights groups have called on Fidesz to withdraw the bill and the European Commission has opened an inquiry into it.

The new law also sets up a list of organisations allowed to provide education about sex in schools.

Drag queen “Elona Musk”, who did not want to use his real name, has worked in a volunteer group that visits schools to educate children about diversity.

Elona himself had a tough time in high school, feeling that he had to hide that he was gay. He grew up in Romania where he said homosexuality was a “huge taboo”.

He moved to Hungary from Transylvania 10 years ago and in his day job, he works for a multinational company. The new law scares him as he fears he will not be able to continue his volunteer work.

“I think this is just one step and it will continue with new and new laws.”

Critics have likened the new legislation to Russia’s 2013 law that bans disseminating “propaganda on non-traditional sexual relations” among young Russians.

Its editor Zsolt Erdei says it is still unclear whether they will be able to display their free printed magazine in public places. The online version will have to be preceded by an age 18 warning.

(Writing by Krisztina Than; Editing by Emelia Sithole-Matarise)

YouTube says it removed one million ‘dangerous’ videos on Covid-19