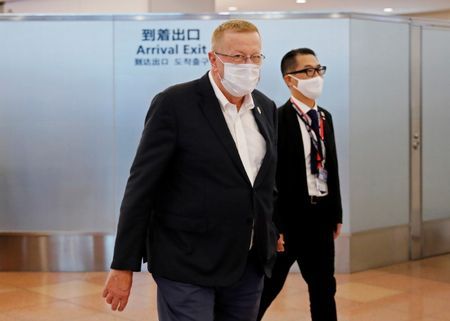 TOKYO (Reuters) – Senior Olympics official John Coates arrived in Tokyo on Tuesday as Games organisers prepared to unveil their latest “playbook” of rules to control COVID-19 infections and the government pondered whether to extend the latest state of emergency.

Coates, a vice-president of the International Olympic Committee (IOC) and its point-man for the event, sparked a backlash last month when he said the Games would go ahead even if Tokyo were under a state of emergency due to the pandemic.

Japan’s government is considering ending the state of emergency in Tokyo and several other prefectures as scheduled on June 20, but keeping some curbs such as on restaurant hours until the Olympics start in July, domestic media have said.

Many Japanese oppose holding the Games and experts have warned that despite a recent decline in the number of new COVID-19 cases after a recent surge, the event could spark a rebound and overload already strained hospitals.

Organisers’ rules already mandate wearing masks by athletes and others in most situations and frequent testing for COVID-19. Athletes and members of the media, whose movements will be restricted, will be subject to GPS monitoring for the first 14 days of their stay in Japan.

Japan has not suffered the explosive outbreaks seen elsewhere but has still recorded more than 772,000 cases and over 14,000 deaths.

A slow vaccination rollout, though recently accelerating, means only 13% of the population has received at least one shot.

A survey by NHK public TV showed 37% approved of his government against 45% who disapproved, the highest disapproval rating since he took office last September.

More than two-thirds were not persuaded by his explanation of why the Games should be held or how they would be made safe.

Just under one-third wanted the Games cancelled while 61% wanted either a cap on spectators or no spectators at all. Organisers have already decided against allowing spectators from abroad and will make a call on domestic spectators later this month.

Opposition parties on Tuesday submitted a no-confidence motion in parliament’s lower house after ruling parties rejected their demand to extend the session, which ends on Wednesday, to cope with the pandemic.

The motion was expected to be voted down since Suga’s Liberal Democratic Party and its coalition partner hold a majority in the chamber.

Reflecting the role of money in decisions to forge ahead, NBCUniversal Chief Executive Jeff Shell said on Monday the event could be the most profitable Olympics in NBC’s history. NBCUniversal, owned by Comcast Corp [CMCSA.O], paid $7.65 billion to extend its U.S. broadcast rights for the Olympics through 2032.

The Games may also provide an opportunity for diplomacy. Japan’s Yomiuri newspaper said South Korean President Moon Jae-In was arranging a visit to Japan timed with the Games and Seoul is hoping Moon will hold his first ever talks with Suga then.

The relationship between South Korea and Japan has soured in recent years due to disputes over war-time history and trade.