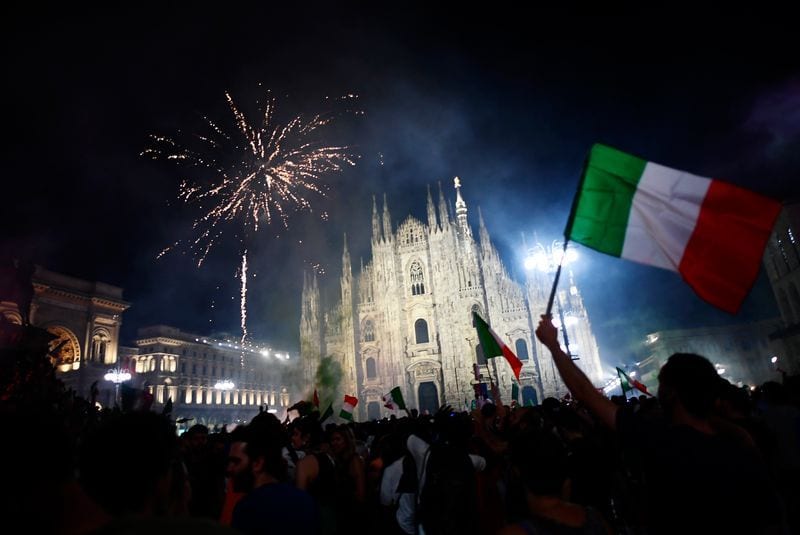 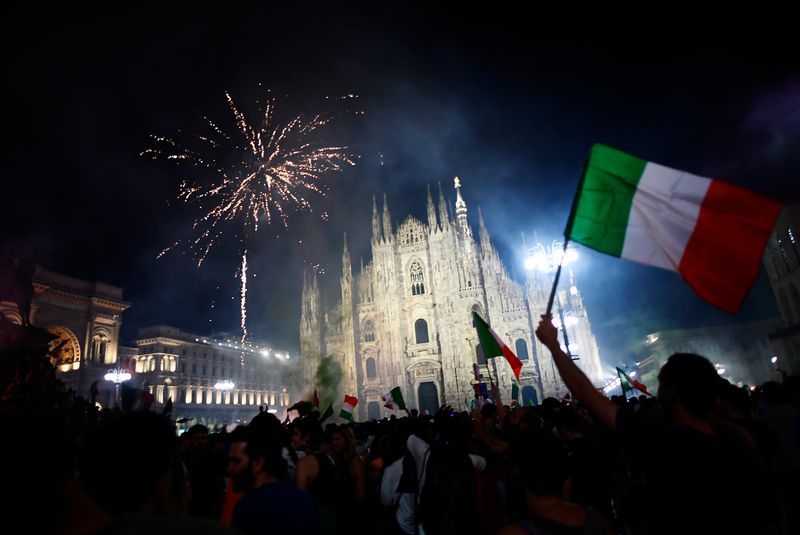 ROME (Reuters) – After 18 months of pandemic hell, Italy revelled in some soccer heaven on Monday after its national team brought back the Euro cup for the first time since 1968 following victory over England in London.

Led by coach Roberto Mancini, the players landed shortly after dawn to find many fans were still celebrating in the early morning cool, with the smell of fireworks lingering in the streets and flags flapping out of car windows.

Italy was the first Western country to be slammed by the coronavirus last year and has registered 127,775 deaths so far, more than any European country bar Britain.

Most of the restrictions aimed at curbing contagion have been lifted and Sunday felt like a liberation in many squares across the country where the soccer triumph was greeted by an explosion of cheers, blaring car horns and tears.

The team is known simply as the Azzurri, the colour of the deep blue skies that sit over Italy throughout the summer, uniting the country as much as the shared passion for soccer.

“Soccer is not a metaphor of life, or politics, but the national team always ends up resembling the nation it represents. This past month, Mancini’s team has reminded us that being Italian isn’t so bad after all,” Corriere della Sera newspaper said.

A brass band marched through the streets of the southern island of Lampedusa, fans rowed through the canals of Venice and a procession of honking cars drove along the same street in the northern city of Bergamo, where last year army trucks queued up to collect coffins of COVID victims.

Plaudits poured in from all sides, from politicians to priests, hoping that success on the soccer field held a broader message for a nation that registered its worst recession last year since World War Two and is now seeking redemption.

“Behind this team there is an entire country that never gives up, that never quits, that always finds new energy to express courage,” Italy’s association of Catholic bishops wrote.

Farmers’ federation Coldiretti hoped the economy would receive a similar boost to 2006, when the Azzurri won the World Cup. On that occasion, exports rose 10% the following year, while 3.5% more tourists visited the country as the national brand received a global fillip, Coldiretti said in a statement.

“If this (victory) remains a beautiful memory in a dark moment or if instead it becomes a symbol of rebirth depends only on us,” Corriere della Sera wrote.

As Covid cases rose, so did hospital hacks in France

Covid-19: Shopping complex in KK ordered to close until Saturday (May 22) for sanitisation