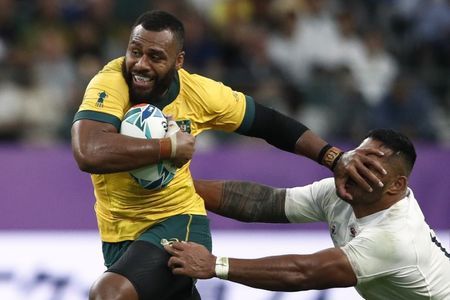 (Reuters) – Samu Kerevi thought his international career was over after the 2019 Rugby World Cup but he may get another chance to represent Australia at the Tokyo Olympics after being selected in a 13-man sevens squad for a warmup tournament this month.

Australia are due to face Olympic gold medallists Fiji, world champions New Zealand and an Oceania Barbarians team in the June 25-27 event in Townsville, Queensland.

Kerevi, who has been allowed to return to Australia to vie for a place on the team by his Japanese club Suntory Sungoliath, said he was taking nothing for granted but was delighted to get the opportunity.

“I think after the World Cup, I thought that was it,” said Kerevi, who played 29 tests for the Wallabies.

“As a 15s player, it’s pretty rare to have the opportunity to play at the Olympics … Nothing is guaranteed and for me the biggest calling to come was the opportunity and test myself among the boys here.

“I’m here to compete, I’m here to push myself as much as my team mates around me and that will just create competition in the team and push us to be better.”

“Just by virtue of having a player of his calibre, it just changes the dynamic of the squad, which is great,” Walsh said.

“He’s had a big impact right away but there are no guarantees he is going to be picked. There is still a fair bit to go but so far it’s very, very promising.”

Super Rugby players Lewis Holland, Lachie Anderson and Tim Anstee were also included in the squad, while Joe Pincus returns from injury. The team will be captained by Nick Malouf.

The Tokyo Olympics, delayed last year due to the COVID-19 pandemic, begin on July 23.

No TNG RFID? You Can Buy It Online & Install It Yourself For RM35