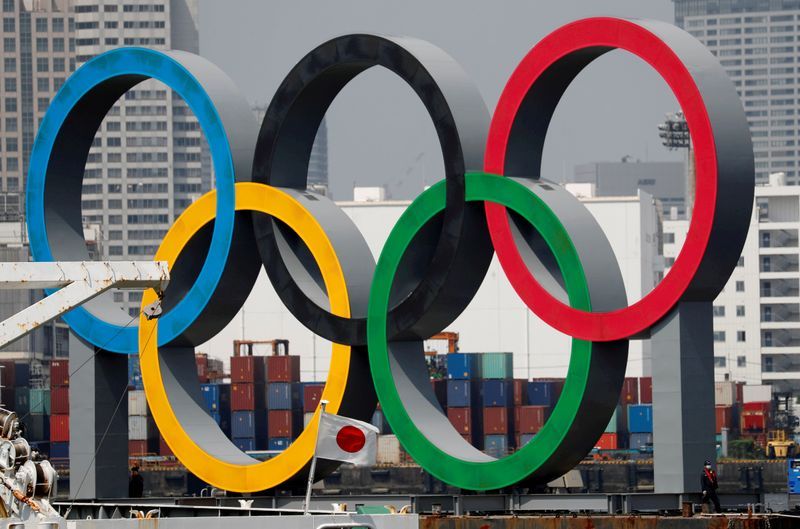 TOKYO (Reuters) -Nearly 70% of Japanese firms want the Tokyo Olympics either cancelled or postponed, a Reuters survey found, underscoring concerns that the Games will increase coronavirus infections at a time when the medical system is under heavy strain.

With just nine weeks to go before the Games, states of emergency have been imposed in much of Japan until the end of the month to counter a spike in infections that has resulted in a shortage of medical staff and hospital beds in some areas.

The country’s vaccination programme has also been particularly slow, with just 4% of the population inoculated, the lowest rate among the Group of Seven nations.

The Corporate Survey, conducted May 6-17, showed 37% of firms were in favour of cancellation, while 32% want a postponement.

In particular, those calling for a cancellation have increased from February when the same questions were asked in the monthly survey. Then, 29% were keen on a cancellation while 36% favoured a delay.

“There’s no way that the Olympics can go ahead under the current circumstances,” a manager at a metals firm wrote in the survey.

“Nothing the government does seems to be well-planned. All it appears to be doing is spreading anxiety.”

The results of the survey are roughly in line with public opinion polls.

Many Tokyo residents say, however, they are conflicted about holding the Games.

“Variant strains could enter, creating a terrible situation,” said Keiko Yamamura, a 58-year old yoga instructor. “But when I think of the athletes who have worked so hard, I’d like to let them do it.”

(Open https://reut.rs/3wgkfwO in an external browser to see a picture story on the views of Tokyo residents)

The government and International Olympic Committee have repeatedly said the Games will go ahead. About 70% of the 10,500 athletes due to attend have already qualified.

If the Games, which have already been postponed by a year, were cancelled, a quarter of the firms expect big economic losses. But nearly 60% said economic losses would be limited while another 13% said they expect economic losses to be relatively small.

The survey, conducted for Reuters by Nikkei Research, canvassed some 480 large and midsize non-financial companies, of which about 230 answered questions on the Olympics. Respondents participate in the survey on condition of anonymity.