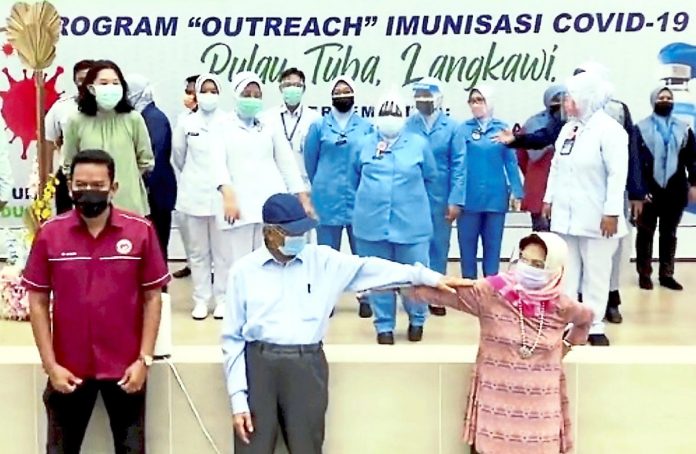 The Langkawi MP and former prime minister, who turned 96 yesterday, said Pejuang was also in the midst of identifying other parliamentary and state seats that the party could potentially vie for in the coming polls.

However, Dr Mahathir, who won the seat under Parti Pribumi Bersatu Malaysia, could not confirm if he himself would be nominated to defend the seat, saying that the decision would rest with the party’s leadership and his state of health during GE15.

“Pejuang will contest where we see that we can and now, we are studying which areas we can contest in.

“In Langkawi, we will contest. (On my candidacy), I don’t know that yet because today, I’m healthy. Tomorrow I might not be; how can we know?

“Whatever it is, whatever I can do to help Langkawi, I will do it, ” he said at the Keda Hall in Pulau Tuba, Langkawi, yesterday.

On Thursday, Dr Mahathir said Pejuang was now officially registered as a political party after receiving approval from the Registrar of Societies.

Meanwhile, the birthday boy said he prayed that all Malaysians would work towards making the country’s status as a developed nation a future reality.

Dr Mahathir, who is the country’s longest-serving prime minister from 1981 to 2003 before assuming the post again from May 2018 to February 2020, also expressed his gratitude for being given the time and opportunity to serve the nation.

“I’d like to thank everyone who wished me a happy 96th birthday. One for the album: A screencap from a video posted on Dr Mahathir’s Facebook page showing the former prime minister and Siti Hasmah with health personnel during a visit to a vaccination centre in Pulau Langkawi.

“I’m grateful for being given the time and opportunity to serve my religion, race and nation, ” he said.

“I apologise if what I did has offended any party.

“I pray that this beloved country will be developed by all until we reach our objective of becoming a developed nation, ” he added.

Birthday wishes and greetings for Dr Mahathir have been pouring in on social media from the rakyat as well as political friends and foes.

Veteran journalist Kadir Jasin who was Dr Mahathir’s media and communications adviser during the Pakatan Harapan administration, dedicated a short and sweet post to him on Facebook.

“Sticks and stones may break his bones, but words can never hurt him. He dares to stand up and be counted. Happy 96th Birthday, Tun Dr Mahathir, ” wrote Kadir.

International Trade and Industry Minister Datuk Seri Azmin Ali took to Facebook to post an old photo of himself and his wife receiving blessings from Dr Mahathir during their wedding reception decades ago.

“Happy Birthday Tun. Thank you for all the courage you’ve shown me throughout the years.

“Wishing you good health, longevity and happiness, ” he wrote.

Bakri MP and former energy, science, technology, environment and climate change minister Yeo Bee Yin also shared a throwback photo of herself at her university graduation ceremony where she received her scroll from Dr Mahathir.

“Happy birthday Tun! May you and Tun Siti Hasmah be blessed with good health and happiness.

“Picture taken about 15 years ago. I was one of the many young graduates from Universiti Teknologi Petronas that received the graduation scroll from Tun, ” she wrote on Facebook.

“May you be blessed with health and happiness, ” wrote the Bagan MP on Facebook.

DNB gets Malaysia ready for 5G