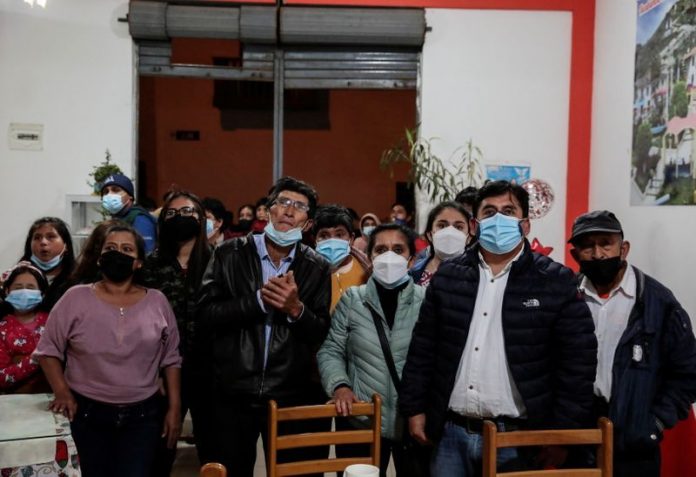 LIMA/TACABAMBA, Peru (Reuters) – A deeply polarized Peru will awake on Monday in uncertainty over who will be its next president with election tallies showing the socialist and conservative rivals separated by only razor thin margins as the vote count continued.

An unofficial fast count late on Sunday by Ipsos Peru gave leftist teacher Pedro Castillo a fractional lead after an exit poll had said rival Keiko Fujimori would eke out a win, leaving the country, investors and mining firms guessing.

The official count https://www.resultadossep.eleccionesgenerales2021.pe/SEP2021/ResumenGeneral/10/T, with some 85% of ballots processed as of 0400 am (0900 GMT) showed Fujimori, a market-friendly candidate who is divisive in Peru, ahead by about 51%-49%, though with the late votes expected to be more rural, favoring Castillo.

The likely photo finish could lead to days of uncertainty and tension, with the vote underscoring a sharp divide between capital city Lima and the country’s rural hinterland that has propelled Castillo’s unexpected rise.

Lucia Dammert, a Peruvian academic based in Chile, predicted that the coming days would be febrile, with potential challenges to the votes and requests for recounts. She forecast protests particularly if Fujimori were to win.

“What is clear is that if Keiko wins she is going to have to shut herself up in a fortress in Lima and just stomach what will happen in the rest of the country,” she said.

As first results trickled in on Sunday evening, 51-year-old Castillo, the son of peasant farmers who has pledged to shake up Peru’s constitution and mining laws, had rallied supporters to “defend the vote”, though later called for calm.

Fujimori, 46, the daughter of ex-president Alberto Fujimori, who is in jail for human rights abuses and corruption, also appealed for “prudence, calm and peace from both groups”.

J.P. Morgan said in a note that it could be days before the final outcome of the election in the copper-rich Andean nation was clear, and the two candidates might opt to wait for this process to finish before declaring victory or conceding defeat.

“Unless the too-close-to-call scenario depicted by the quick count proves wrong, we seem poised for a number of days of heightened uncertainty ahead,” it said.

In a polarized race, the candidates pledged vastly different remedies for Peru, which has suffered corruption scandals in recent years and a sharp economic slump brought on by the world’s deadliest per capita COVID-19 outbreak.

Fujimori has pledged to follow the free-market model and maintain economic stability in Peru, the world’s second largest copper producer, with a “a mother’s firm hand.” nL2N2NL2KR

Castillo, who has become a champion for the poor, has promised to redraft the constitution to strengthen the role of the state and take a larger portion of profits from mining firms.

(Reporting by Marco Aquino in Lima and Marcelo Rochabrun in Tacabamba; Writing by Aislinn Laing and Adam Jourdan; editing by Mark Heinrich)

England v India, third ODI: Bairstow and Root out for ducks in same over