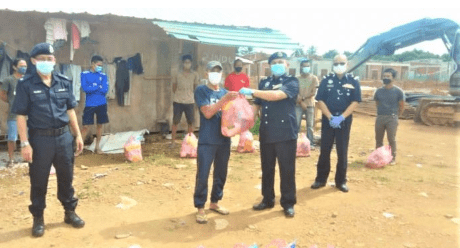 KUCHING: Kuching district police took proactive measures to reach out to those who may have missed out from being given their food aid.

Among the items given to the families were rice, sugar, flour, and cooking oil. This came from an anonymous donor through the Santubong police department.

Merbin said the workers are paid on a daily basis and their sources of income were disrupted following the movement control order (MCO), thus making it difficult for them to buy food.

“On the initiative and based on humanity, it is hoped with the aid given to them, it will relieve some of their burdens.

“Ten of the families are locals, while the remaining five families are Indonesian nationals. At first, they thought the MCO was not being extended and decided to stay at their hut at the project site.

“With the extension of the MCO and the lack of income, their plans to return home was also scuppered,” Merbin said in a statement yesterday.

The police deputy chief also took the time to advise the families to take care of themselves during the MCO period and adhere to the directives issued by the government.