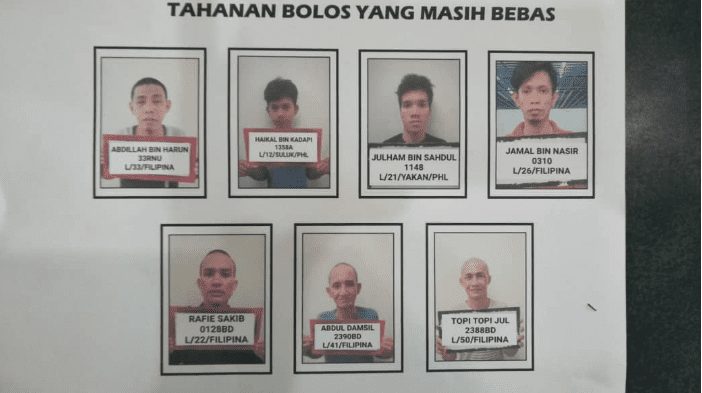 KOTA KINABALU: Police are still on the hunt for seven of 18 illegal immigrants who fled the Menggatal detention centre on Sunday afternoon.

The suspects, aged between 30 and 40, were reported to have caused a riot in one of the detention blocks around 3.30pm, and fled thereafter.

“The illegal immigrants were held at the detention centre while they awaited deportation. However, they caused a riot and tried to escape.

“Five of them were stopped on the spot while six more managed to climb over the fence and escaped. However, within six hours of the detainees escaping, police found five of them not far from the centre and another one was arrested this (yesterday) morning. That leaves seven more still on the run,” said Kota Kinabalu district police chief, ACP Habibi Majinji.

Habibi told a press conference yesterday that police immediately mobilised personnel, including patrol cars and the K9 unit, within the vicinity of the detention centre.

He said the area was surrounded and nearby roads were blocked.

According to Habibi, all 18 detainees were from a neighbouring country and were found in Sabah with no legal documents before they were taken into custody and awaited deportation.

The detainees would face charges under Sections 147 and 224 of the Penal Code, for rioting and resistance of arrest, respectively.

The public are urged to notify police immediately with any relevant information.

In addition, Habibi informed that no new cases of Covid-19 were reported in detention centres within the Kota Kinabalu district.

He assured that detainees would be screened before being transferred to ensure they would only be moved once they tested negative.

Queen's funeral: People advised not to set off to for lying-in-state