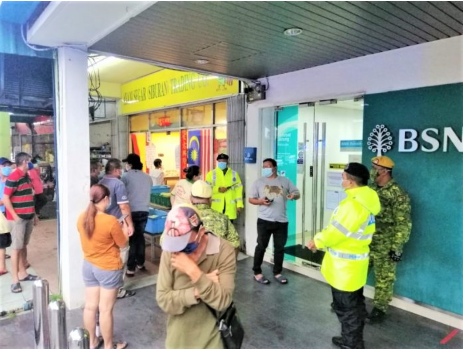 PADAWAN: Padawan police have taken proactive action to station their personnel at Bank Simpanan Nasional (BSN) branches in the district for crowd control.

Padawan district deputy police chief DSP Lim Jaw Shyong said that this was due to individuals lining up at BSN banks to collect their government aid.

“The Bantuan Prihatin Nasional (BPN) aid has been distributed through BSN branches and under the Padawan police administration, there are three BSN branches which are located in Siburan, Kota Sentosa and Matang Jaya.

“In line with enforcing the movement control order (MCO), Padawan police have taken the proactive action with the expectation of the public to flock to nearby branches for their cash withdrawals,” he said in a statement.

Several measures have been put in place to ensure the safety of the public while adhering to the MCO. This is to protect their belongings and to prevent the spread of Covid-19.

Lim said this was done in collaboration with the respective BSN branch managers, as well as having discussions with branch coordinating officers who are responsible for overseeing all BSN branches in Padawan area for effective action.

“For Padawan, the enforcement of control at the BSN branch is led by the Crime Prevention and Community Safety Division chief ASP Abdul Wadi Abdul Rani, who is coordinating with the BSN branch representatives, as well as providing regular monitoring and patrols.

“Police station chiefs are also responsible for monitoring BSN branches under their administration area,” he said.

He then called upon the public to cooperate, be patient and obey all the rules in the MCO.

Pro-wrestlers open the lock in Tokyo, one suplex at a time

Swedish fish dish is so pungent it smells like rotten eggs