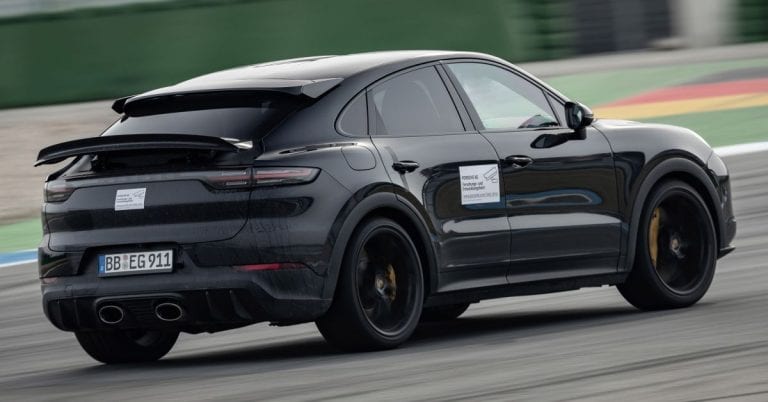 Porsche is gearing up to add a new high-performance variant to the third-generation Cayenne product line, which is heavily rumoured to be the Turbo S. The company recently released a few photos of a slightly camouflaged prototype and roped in two-time World Rally Championship winner and Porsche brand ambassador Walter Röhrl to put it through its paces.

If you look at the Cayenne range, there are currently six variants available for both the standard and coupe-like body styles, including the base Cayenne, the E-Hybrid, the S, the GTS, the Turbo and the Turbo S E-Hybrid. The upcoming variant should take its place at the very top above the Turbo S E-Hybrid in the new seven-variant line-up.

Porsche says the forthcoming variant is based on the existing Cayenne Turbo Coupe, but with several enhancements to make it dynamically superior. Meanwhile, Car and Driver and Evo UK report that the new variant can only be had with the Cayenne Coupe model, meaning the regular Cayenne can’t be specified in Turbo S (if it’s called that) guise. Of course, we’ll have to wait for Porsche to reveal all, with a debut set to take place later in June.

A Cayenne Turbo S Coupe will be a good model for Porsche to take on other fast SUVs like the Audi RS Q8, BMW X6 M Competition, Mercedes-AMG GLE 63 S Coupe and the Lamborghini Urus. The current Cayenne Turbo Coupe’s 4.0 litre twin-turbo V8 makes 550 PS (542 hp) and 770 Nm of torque, which puts it at a disadvantage compared to the competitors mentioned.

Of course, there’s the Cayenne Turbo S E-Hybrid Coupe (yes, the names are long) if you want more power, with the plug-in hybrid variant packing 680 PS (671 hp) and 900 Nm. However, the PHEV variant is around 330 kg more than the Cayenne Turbo Coupe, so the added heft that comes with all the electrification parts isn’t necessarily great for dynamics.

With that in mind, the new Turbo S variant is said to be a revised version of the Turbo’s V8 that delivers a strong 640 PS (631 hp) and 850 Nm, paired with a ZF eight-speed automatic transmission. That’s enough to trump the Audi, BMW and Mercedes-Benz SUVs, while putting it within close range of the Lamborghini. It doesn’t beat the PHEV variant, but consider the weight difference again.

The high-performance variant gets a number of items to shed even more weight, including 22-inch forged wheels that are paired with bespoke Pirelli P-Zero Corsa tyres. There’s also a carbon-fibre roof that comes as standard, which is optional on standard Cayenne Coupes with glass roofs.

To make sure the SUV behaves in the corners, Porsche even revised the front axle, with the front wheels being half an inch wider, and negative camber is up by 0.45 degrees to provide a larger contact area for the tyres.

As for styling, the mild disguise does little to hide some of the key changes like the revised splitter and larger cooling intakes at the front. Moving to the rear, the roof spoiler gains additional side extensions, while the active rear spoiler on the tailgate is much more prominent for more downforce. This is helped along by a new carbon-fibre diffuser, which is joined by a pair of centrally mounted tailpipes that is part of a titanium sports exhaust system with no middle silencer.