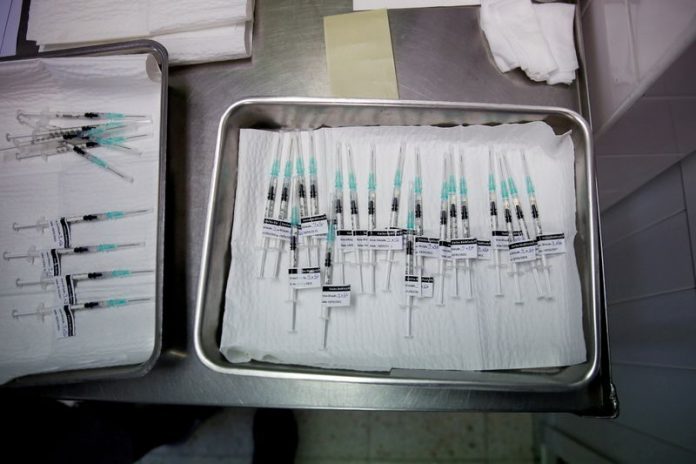 LISBON (Reuters) – Portugal said on Saturday it hoped to vaccinate a further 1.7 million people against COVID-19 over the next two weeks as authorities scramble to contain a surge in infections caused by the more contagious Delta variant.

Cases in Portugal, a nation of just over 10 million, jumped by 2,605 on Saturday, the biggest increase since Feb. 13., taking the total cases since the pandemic began to 887,047.

New cases are being reported mostly among unvaccinated younger people so daily coronavirus deaths, currently in single digits, remain well below levels in February, when the country was still under lockdown after January’s second wave.

Portugal has fully vaccinated around 35% of its population, and those aged 18 to 29 can start booking vaccination appointments on Sunday.

In a statement, the vaccination taskforce said it would use all installed capacity to vaccinate 850,000 people per week over the next 14 days to “protect the population as fast as possible” due to the “rapid spread” of the Delta variant.

Around 70% of cases in Portugal are of the Delta variant, which was first identified in India but has led to a wave of new infections worldwide. The variant is sweeping across the country, with the Lisbon region and tourist magnet Algarve being the most affected.

The speed-up of the vaccination rollout could lead to longer queues outside vaccination centres, the taskforce said.

The national health institute, Ricardo Jorge, said in a report the variant was putting increasing pressure on the health system. More than 500 COVID-19 patients are in hospital.

A night-time curfew came into force on Friday evening in 45 municipalities including Lisbon, Porto and Albufeira, and restaurants and non-food shops must close earlier at the weekend in some areas.

Suspect who went on rampage remanded for four days