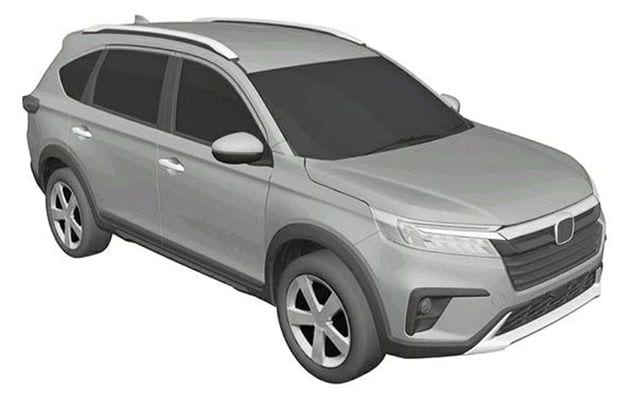 In May this year, Honda Indonesia revealed the N7X Concept, which serves to preview an upcoming seven-seat SUV model. Designed by Honda R&D Asia Pacific, the “New 7-Seater eXcitement” design study was heavily tipped to preview a replacement for the current BR-V, which has been around since 2015.

Honda has hinted that the N7X could be revealed in production form at this year’s Gaikindo Indonesia International Auto Show (GIIAS) that is scheduled to take place in August. However, it looks like we might not need to wait until then, as patent images of said model have been unearthed from the database of Direktorat Jenderal Kekayaan Intelektual (DJKI), which deals with intellectual property protection in Indonesia.

The images show a vehicle that looks shockingly similar to the N7X, which, to be honest, looked almost production-ready when it was first revealed. Look back to the previous BR-V Prototype and you’ll see that this trend has been going on for a while. For more evidence, refer to the Honda e (Prototype) and the latest 11th-generation Civic (Prototype). All the standout cues of the concept are present in the patent images, including the multi-slat front grille, distinctive side character line running above the door handles, L-shaped DRLs, sculpted bonnet and wraparound taillights with graphics reminiscent of those on the current City.

As far as we can tell, the only notable differences from the show car include the deletion of the LED positioning lamps near the fog lamp sections (it’s just circular fog lamps now), along with the side garnish between the wheels. This batch of images do not show the interior, but we reckon it’ll be close to what has been previewed by the concept, if the exterior is anything to go by.

We’ll have to wait for a full reveal to see the production N7X in its final form and to finally determine what the model is all about. This is because it was previously reported that the N7X won’t be a new version of an existing model, be it the BR-V or even its MPV derivative, the Mobilio.

“The Honda N7X concept doesn’t point at any specific existing model. But the N7X is a picture of how a seven-seater model should be done,” said Yusak Billy, Honda Prospect Motor’s (HPM) sales and marketing director, at the time.

It was also mentioned that the show car combines the comfort and space of a Low MPV with the robustness and high-riding look of a Low SUV. No dimensions were given, but the N7X is understood to be longer, wider and taller than today’s Mobilio and BR-V.

However, Indonesian journalist Indra Fathan claims that the production N7X will indeed be called the BR-V based on what he found on Indonesia’s Samsat (abbreviation for Sistem Administrasi Manunggal Satu Atap), which is a system that regulates vehicle taxes charged yearly in the country.

The current BR-V carries the codename DG1 (petrol engine) and DG2 (diesel engine), but Samsat’s database shows a new code: DG3. Five variants are also listed – 1.5 S MT, 1.5 E MT, 1.5 E CVT, 1.5 Prestige CVT and 1.5 Prestige HS CVT – which suggests a 1.5 litre engine and the availability of Honda Sensing (HS). On the latter, Honda’s LaneWatch camera is clearly seen on the concept, and that system is part of the Honda Sensing suite.

Of course, only Honda holds all the answers, and we’ll hopefully get some of them in due time. In the meantime, what do you think of the production N7X Concept? It’s certainly a big leap forward from the BR-V, don’t you think? Share your thoughts in the comments below.