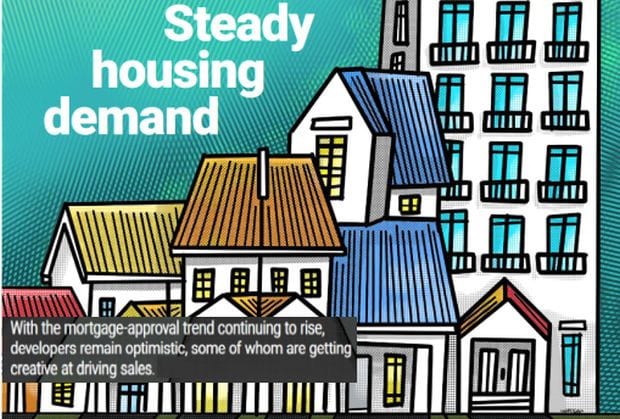 HOUSING demand has remained steady amid the Covid-19 pandemic, as mortgage approval trends continue to rise and developers get creative at driving sales during unprecedented, tough times. 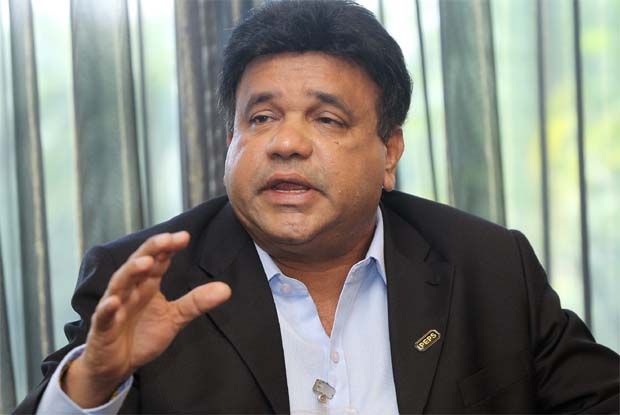 “The sizes of properties have shrunk over the years. Today, affordable means reducing prices and size, ” he tells StarBizWeek.

“This is due to pricing and locality. If you can get this right, there will always be demand for it.”

He adds that even high-rise units such as condos and service apartments have started selling better as prices have since come down, following years of oversupply for such units.

An analyst with a local bank-backed brokerage says it was a good move by the central bank to maintain the record-low overnight policy rate of 1.75%.

“It will certainly help to entice potential property buyers as it means lower cost for property purchases, ” he says.

UOB Kay Hian in a recent report says property loan approval rates are expected to start recovering from the third quarter (Q3) of this year, as lockdown restrictions begin easing with the gradual opening of the economy. 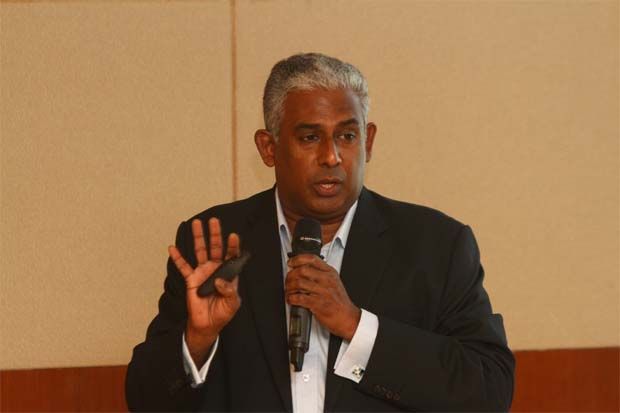 Siva Shanker: The most important element here is the vaccine. It is the light at the end of the tunnel. The sooner we can attain hard immunity, the faster we will be up and running again.

“While this remains below the pre-Covid-19 levels of above 40%, we do not expect banks to further tighten approval standards since they have been fairly stringent even before the onset of the pandemic.

“We expect to see a recovery in the loan approval rate from Q3 of 2021, as the loan processing backlog is expected to ease with the gradual reopening of the economy.”

UOB Kay Hian says this would also translate to a better conversion rate of property sales, as the transacted value historically trends in tandem with the mortgage approval value.

“Developers’ earnings in Q2 and Q3 of 2021 are expected to be sluggish amid closure of sales galleries and a slowdown in loan processing. Property launches were also halted due to uncertainties.

“A double whammy came as all construction activities in Selangor and Kuala Lumpur areas were ordered to pause for two weeks, following the enhanced movement control order. Most developers’ construction sites were impacted and this could delay progress billings in 2021.”

With the lockdown prolonged and tightened, UOB Kay Hian says it is further slashing sector earnings by 7% for 2021.

“However, we foresee a potential strong recovery in Q4, with the gradual economic reopening as evidenced in Q1 of 2021.” The research house says developers can better weather the storm of the pandemic this time as digitalisation efforts will be able to cushion the lockdown impact.

“Since mid-2020, property companies have been accelerating their digital transformation to digitalise the end-to-end property buying process without the buyers’ physical presence.

“This helps developers to accelerate the property sales conversion rate. Importantly, we expect improved margins for 2021 amid lower operating expenditure, particularly cost savings from marketing and administrative expenses given the wide adoption of online platforms.”

In spite of the adverse impact that the pandemic has had on the economy and property sector, many developers have either maintained or revised their 2021 earnings targets upwards on the back of strong sales.

announced that it is well-positioned to meet its 2021 target of RM1.6bil, having achieved property sales of approximately RM650.5mil for the first five months of the year as at end May, while locking in RM400mil for Q1 ended March 31, 2021.

announced that it had recorded RM1.32bil in sales in its Q2 ended April 30, 2021, nearly double the sales of RM706mil achieved during Q1 of its current financial year.

In a recent interview with StarBizWeek, IOI Properties Group Bhd

group chief executive officer Datuk Voon Tin Yow said the company will meet, if not surpass, its sales target for the current financial year of more than RM2bil.

Earlier this week, Sunway Property announced that it is revising upwards its 2021 sales target to RM2.2bil from the RM1.6bil it had set in January this year, underpinned by the group’s strong performance in Singapore.

An analyst notes that the outlook for the Singapore market is bright, as the country has been successful in containing the Covid-19 crisis.

Singapore’s ability to contain the situation aggressively and effectively is indeed difficult to replicate, but they did show the world that if it needs to be done, it can be done. They were also efficient in rolling out their vaccines to the public. “In Malaysia’s case, rolling out the vaccine as quickly as possible is key to economic recovery, as well as the property sector.”

He adds that the ongoing Home Ownership Campaign (HOC) will help developers buffer the impact of the pandemic.

“The incentives under the campaign, such as the stamp duty exemption for residential homes priced between RM300, 000 and RM2.5mil, can help the purchaser save on purchase cost and spur consumer sentiment and buying interest, ” he says.

The campaign was supposed to end in May, but has been extended until the end of this year.

The HOC was initially kicked off in January 2019 to address the overhang problem in the country.

The campaign, which was initially intended for six months, was extended for a full year.

It proved successful, having generated sales totalling RM23.2bil in 2019, surpassing the government’s initial target of RM17bil.

The government reintroduced the HOC in June last year under Penjana to boost the property market after it was adversely affected by the Covid-19 pandemic.

In March this year, during the Real Estate and Housing Developers’ Association’s briefing on the property market for 2021, its president Datuk Soam Heng Choon revealed that since the HOC was reintroduced last June, a total of 34, 354 residential units valued at RM25.65bil had been sold as at Feb 28, 2021.

Knight Frank Malaysia deputy managing director Keith Ooi says the logistics sub-sector is expected to perform well in the second half of 2021.

“The logistics industry in Malaysia has been growing steadily in recent years due to the higher e-commerce penetration rate. This, coupled with the structural shift towards omnichannel retailing, has led to an increase in demand for modern warehousing space to meet the surge in last mile delivery.

“Prime logistics asset values are expected to rise further over the near term, underpinned by strong growth in the e-commerce market. With interest rates staying low in the foreseeable future, yields are expected to remain at low levels, ” he says. “The most important element here is the vaccine. It is the light at the end of the tunnel. The sooner we can attain herd immunity, the faster we will be up and running again.”

With the vaccine rollout being front and centre, lockdowns easing, the economy opening and political uncertainty removed, Siva says the local property market can start to see an improvement by Q4 of this year.

“If all of those things are in place, we should be able to see a small recovery by Q4 of this year.

“Year-on-year, compared with Q4 of 2020, the growth might be lower, but it’s still better than falling into negative territory, ” he says.

In light of the pandemic, today, many property players have refocused their emphasis on digitalisation, affordable properties and churning out products that are catered towards customer needs.

“Digitalisation will accord us operational efficiencies while enabling us to ensure the health and wellbeing of our people, ” he says in the group’s 2020 annual report.

“We will also continue to explore ways in which we can enhance the sales experience for our customers by translating the physical viewing experience onto our virtual platforms.”

Kenanga Research in a recent report says property developers that are capable of adapting to changes will bode well during the pandemic.

UOB Kay Hian, meanwhile, says developers with strong balance sheets have been on buying mode to replenish their land banks for future developments.

We gathered that these land transactions are located in more mature areas in the Klang Valley region.

“This signals developers’ move to reframe their strategies to focus on high demand/strategic locations for long-term growth.

“For instance, UEM Sunrise is buying land in the more prime locales such as Petaling Jaya and Cheras, which could provide a quicker turnaround. That said, we think cash calls could be minimal at this juncture.”

Additionally, UOB Kay Hian says S P Setia Bhd, with its high gearing, had disposed of 960 acres of land with an estimated disposal gain of RM290mil.

“This is in line with the group’s strategy to monetise its non-strategic land bank to strengthen cash flow. The group has also identified nine parcels of land totalling 1, 295 acres with a market value of RM1.96bil for outright sales or on a joint-venture basis.”

“SHG could see an earnings compounded annual growth rate of 20% to 25%, given its ongoing expansion and this would contribute to about 22% of Sunway’s 2023 earnings versus 3% in 2020.

“We believe the strong growth trajectory of SHG could help Sunway build a formidable growth engine and increase Sunway’s valuation over time.

“All in all, we foresee potentially more asset monetisation activities in the property industry amid the soft market outlook.”

AmInvestment Bank, meanwhile, says it remains neutral on the property sector for the second half of 2021.

“The local property sector has been languishing over the last five to six years, since hitting an upswing in mid-2013 when the House Price Index showed double-digit growth.

“We believe the most encouraging signs this year are developers’ Q1 sales growth rate of 5% to 10% year-on-year via online booking platforms amid the pandemic and willingness to sacrifice margins by focusing on affordable residential segments in line with market demand.”

Other encouraging signs, the research house adds, include land banking activities in prime areas with good public infrastructure and connectivity to the KL city centre.

“However, we are cautious on the property outlook in the second half of this year, due to the various movement and economic restrictions that can cause a slower-than-expected recovery in the sector.”

Malaysian Rating Corp Bhd (MARC) in a recent report on the property sector says the pandemic has had an adverse impact on the local residential market.

“The sharp growth rebound in transaction volume following the collapse in Q2 of 2020 is likely unsustainable because of the pandemic’s damage to the economic and social fabric.”

MARC adds that the rise of the middle class has been one of the primary forces sustaining the Malaysian economy.

“After the pandemic hit, however, many now find themselves poor despite still being considered middle class according to the current official M40 classification. It does not help that housing is a main driver of rising middle-class expenditure.”

To alleviate pressure on the overhang situation amid the pandemic, MARC notes that a number of new housing launches had been scaled down in 2020.

“It is notable that the overhang has experienced some moderation since Q1 of 2019, although it remains elevated.