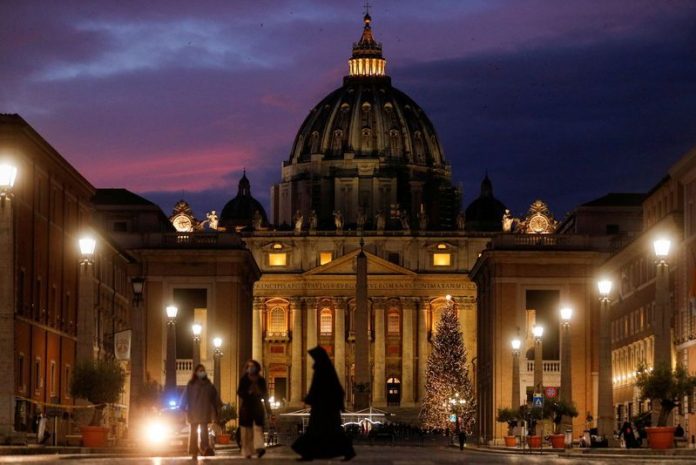 VATICAN CITY (Reuters) – A prosecutor on Thursday asked a Vatican court to sentence a man who is now a priest to six years in prison for alleged sexual abuse committed in a youth seminary in the Vatican before he was ordained.

Father Gabriele Martinelli, now 28, is accused of having forced a person known only as L.G. to have sex, mostly while they were both minors between 2007 and 2012.

The alleged abuse took place in the Pius X Pre-Seminary, which houses altar boys who serve Mass in St. Peter’s, including for popes, and are thinking of becoming priests.

Prosecutor Roberto Zanotti also asked for a four-year sentence for Father Enrico Radice, 72, who was rector at the time, and is charged with having covered up the alleged abuse.

Both Martinelli and Radice have denied wrongdoing and have accused L.G. of mounting a vendetta against them for personal reasons.

The trial, which began in 2020 and is expected to end soon, is the first in the Vatican concerning sexual abuse that allegedly occurred on Vatican territory.

The prosecution says Radice did not block Martinelli from becoming a priest even though he knew about the abuse.

Radice, who had given Martinelli supervisory responsibilities over the other boys, denies this.

In May, Pope Francis ordered that the residence be moved outside the Vatican before the next academic year starts in September.

Since its founding in 1956, the boys lived in the building on Vatican grounds while attending schools outside its walls in Rome.

Last year, judges accepted a prosecution request to include the Opera Don Folchi, a Catholic order of priests and nuns that

ran the pre-seminary, to be added as defendants on charges of negligence.

Malaysians can dive into native tradition at these high cultural villages

INTERACTIVE: Malaysia’s annual durian season kicks off in Penang. Here’s what you need to...

Seinfeld’s Loni Anderson Reference Explained: Who Is She?