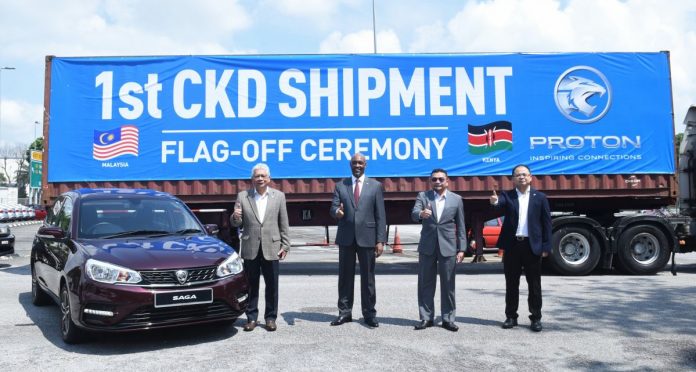 Proton delivered 669 units to overseas distributors in May 2021, the highest ever monthly export total since March 2013. That 98-month high contributed to year-to-date export volume that is 174% of the target set, and only 6% behind total exports for the entire of 2020.

Proton says that with Malaysia undergoing a lockdown to stem the Covid-19 tide, car retail operations have been affected as showrooms have to remain shut. This will affect sales for the next few months, but the recent performance of its international sales division is a bright spot. In its sales reports, Proton typically includes export numbers to the total.

The carmaker says that its export performance is powered by growing demand in several key markets. Pakistan is a new country for Proton and has been by far the top export market for Proton so far in 2021. Coming in second is Egypt, where importer Alpha Ezz El-Arab has received 350 units this year. Brunei is third, and importer PAD Motors had its best sales month ever in May. “At the beginning of the year, our plan for 2021 was to aggressively grow Proton’s export sales volume. Despite international restrictions and the rising cost of shipping caused by the coronavirus, we were confident of being able to meet our goals due to the sales plans of our importers and the appeal of our products. After five months however we are close to doubling the volume target set, which hopefully is a sign for more success in 2021,” said Steven Xu, Proton’s director of international sales.

The next step in Proton’s long term goals is to establish assembly operations in its export markets. Following the commencement of local assembly for the Saga in Kenya, the next market to CKD Proton cars will be Pakistan, which currently sells the X70 and Saga as CBU imports from Malaysia.

“If everything goes to plan our partner in Pakistan, Al-Haj Automotive, will begin assembly operations with the Saga by the end of July or early August at its new plant in Karachi. The X70 will be added to their production line later, and we have high hopes this development will spur sales growth in the South Asian region,” Xu added. The X50 will eventually be assembled there as well, but Proton will prioritise domestic demand for the in-demand model.

Next stop? ASEAN’s two biggest auto markets, Indonesia and Thailand. However, Proton CEO Li Chunrong has said before that it wants to unseat Perodua and be number one in Malaysia first before the company attempts ASEAN, so we’ll see if there’s a change in strategy.

Johor polls: Govt urged to set up special VTL for voters in Singapore

U.S warns Cubans away from sea crossings amid protests, but most cross on land