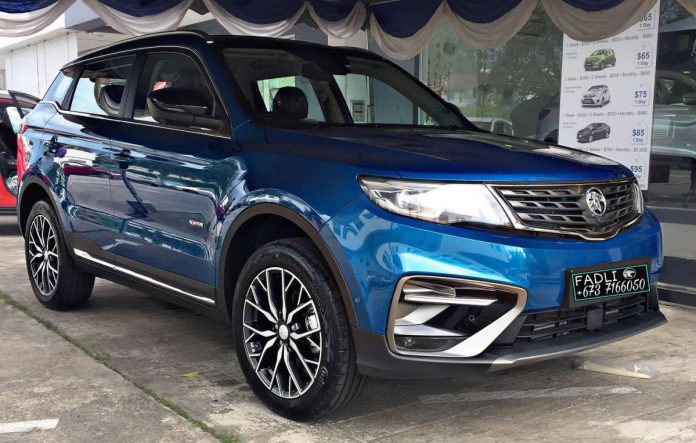 A dealer in Brunei (Fadli Proton Brunei) has shared live photos of the new Proton X70 Exclusive Edition, giving us a better look at the limited-edition model. As a recap, only 37 units of the special SUV will be offered over there, corresponding to the country’s 37th National Day this year.

Mechanically, the X70 EE continues to be powered by a 1.8 litre turbocharged and direct-injected four-cylinder petrol engine with 181 hp (184 PS) and 300 Nm of torque. Drive goes to the front wheels via a seven-speed wet dual-clutch transmission

The X70 EE boasts a two-tone paintjob, which is primarily blue, but a black finish for the roof, side mirrors and rear spoiler. The 19-inch wheels are of a different design too, mimicking what we’ve seen on the Geely Boyue Pro, while the tailgate gets a dedicated emblem. Inside, there’s black Nappa leather upholstery instead of the brown seen in regular variants.

These cues are similar to the X70 Special Edition that we reported on previously, which also gets the blue finish dubbed Ocean Blue that is not on the current colour list that includes Snow White, Armour Silver, Jet Grey, Ruby Red, Cinnamon Brown and Space Grey.

Based on the leaflet of the X70 SE, there’s also the option of the existing Ruby Red for the two-tone scheme. Other highlights touted for the X70 SE include exclusive finishing for the trim, the new wheels, as well as floor mats with SE branding.

Customers in Brunei can now place their order for the X70 EE, although we’ve yet to get word on official pricing. As for the X70 SE, it is expected to be launched in Malaysia soon, so stay tuned.

Volkswagen ID. Buzz to debut March 9 – Five-seater variant, Cargo with up to...