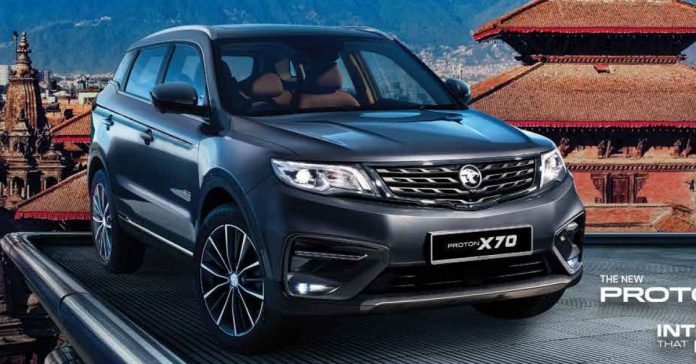 Following market introductions in Brunei and Pakistan, the Proton X70 has now been launched in Nepal. Sold through authorised distributor Jagdamba Motors, which is operated by Shanker Group, the SUV is offered in four variants just like in Malaysia, although the specifications are noticeably different, as you’ll soon find out.

These prices are astronomically more than what we pay for the X70 here (between RM94,800 to RM122,800) mainly because Nepal imposes high import duties – over 200% – on vehicles imported into the country.

As we mentioned at the start, the X70 sold in Nepal has different specifications to what we have here, so let’s get into that. For starters, the Nepal-spec X70 does not come with a 1.8 litre turbocharged four-cylinder petrol engine rated at 184 PS (181 hp) and 300 Nm of torque, which is also used for the Brunei-spec X70. Instead, it gets the same 1.5 litre TGDi three-cylinder engine used in the Pakistan-spec X70 (and our own X50 1.5 TGDi Flagship) that provides 177 PS (174 hp) and 255 Nm. The TGDi unit is paired with a seven-speed dual-clutch transmission and front-wheel drive as standard on all variants except the Executive AWD, which gets all-wheel drive.

Proton previously offered an Executive AWD variant for the X70 in Malaysia, but it was dropped when the CKD version was launched in 2020. The company made this decision due to low demand and introduced a new Premium X variant to complete the line-up at the time.

In terms of standard equipment, the Standard 2WD variant comes with 17-inch alloy wheels, halogen projector headlamps, LED front fog lamps and a power tailgate, the last of which is not present on our equivalent variant. The range-topping Premium 2WD adds to the Executive’s features, with things like 19-inch alloys, hands-free functionality for the powered tailgate, a panoramic sunroof, Nappa leather upholstery, driver’s seat two-way lumbar support, a four-way powered front passenger seat with additional side controls, plus a nine-speaker system with power amplifier and subwoofer.

Compared to Malaysia, colour options for the X70 in Nepal are somewhat limited, with Ruby Red and Cinnamon Brown being absent from the palette. Available hues for all variants are Snow White and Armour Silver, while Jet Grey is offered for all but the Executive AWD, and Space Grey can’t be had with the Standard 2WD. A five-year, unlimited-mileage warranty comes standard.

At least two killed in Houthi strikes on Yemen base, say medical sources