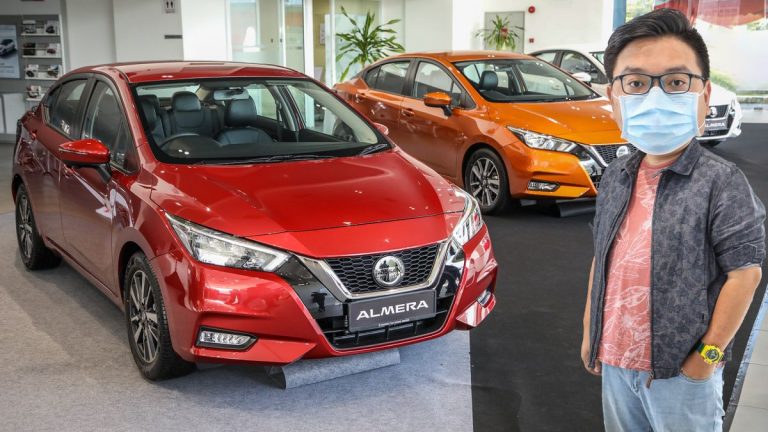 Nissan distributor Edaran Tan Chong Motor (ETCM) dropped a veritable bombshell today by previewing the new Nissan Almera Turbo to select media. We’ve already got a full report detailing the impressive specifications of this B-segment sedan, but for those of you who prefer a video format, we’ve got you covered there as well, with a full walk-around tour and even our first test drive impressions.

The new second-generation Almera is a step-change from its gawky predecessor. Based on the latest European-market Micra hatchback, it’s much longer, wider and lower than before, which makes a world of difference in making this car look more attractive. The bold V-motion grille, slim arrow-shaped head- and tail lights (both available with LED technology for the first time), sharp lines and floating roof all combine to make this a far more stylish machine, which bodes well considering the fierce competition.

It’s the same thing inside as well, with a much more modern-looking interior, the use of stitched soft-touch materials on higher-end models, an available part-digital instrument cluster, and an eight-inch OEM Nissan Connect infotainment touchscreen with Apple CarPlay connectivity.

But by far the most impressive spec concerns safety. Not only does the Almera get six airbags and standard-fit stability control for the first time, but autonomous emergency braking also comes as standard across the entire range. For a perennial laggard like Nissan, this is a significant step forward, and it puts the ball in its competitors’ court.

The engine is also thoroughly modern. Whichever variant you get, the Almera is powered by a new 1.0 litre turbocharged three-cylinder engine, producing 100 PS and 152 Nm of torque from 2,400 to 4,000 rpm. The car also ditches the ancient four-speed automatic transmission for an Xtronic CVT, which comes with D-Step Logic that mimics the performance of a multi-ratio automatic.

No confirmed prices have been revealed just yet, but ETCM estimates that both the base VL and mid-range VLP will be priced around the RM80,000 region, while the range-topping VLT is expected to retail somewhere around the RM90,000 mark. Bookings are open starting tomorrow, so the launch shouldn’t be too far away.

But enough of all that. You’re here for the video, so sit back and let our man Hafriz Shah get into finer detail on the car’s specs, as well as telling you what he thinks about how the new Almera drives. And as always, let us know what you think in the comments after the jump.