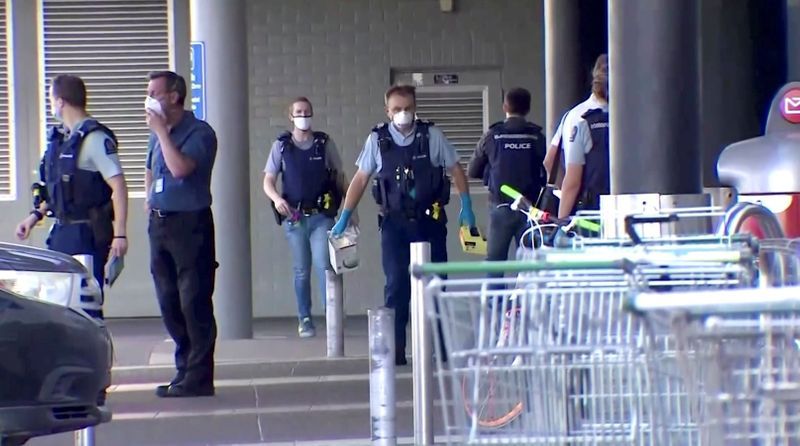 (Reuters) – New Zealand police on Friday shot and killed a “violent extremist” who was known to authorities, Prime Minister Jacinda Ardern said, after he stabbed and wounded at least six people in a supermarket.

The attacker, a Sri Lankan national who had been in New Zealand for 10 years, was inspired by the Islamic State militant group and was being monitored constantly, Ardern said.

Following are comments from witnesses and others to the attack in the New Lynn supermarket.

“He was attacking people. All I heard was a lot of screaming.”

“I take my hat off to the police”

A 34-YEAR OLD MAN WHO WITNESSED THE BEGINNING OF THE ATTACK TOLD THE NEW ZEALAND HERALD:

“It literally happened in front of me. I was just buying stuff and walking toward the milk aisle and then suddenly I heard a person shouting loudly ‘Allahu akbar’ (God is greatest) and just running.

“He had a knife, a pretty big knife – like I would say the size of his arm. It was very scary … It was four or five steps away from me, and I had a clear path to run so I ran.

“While people were coming out I could see one lady wearing a white T-shirt completely bleeding and really panicking. People were trying to help her … I saw another person bleeding from the shoulder really bad.”

“People were panicking and it was a gridlock trying to get out of New Lynn. Police and ambulances (were) everywhere.

“Police cars kept arriving and people were running away from the mall trying to get out of the area. I am very thankful I didn’t arrive five minutes earlier as I would’ve been inside.”

AMIT NAND WHO WAS IN THE SUPERMARKET AISLE WHERE THE STABBING TOOK PLACE TOLD THE NEWSHUB NEWS SERVICE:

“People were running up to me saying ‘go outside because people are being stabbed’ … I saw him with a knife and then I went past him, I went by him with another guy and I told him to ‘drop the … knife’.

“He went past us by the aisle. This undercover cop came to me … I was going to hit him … The cop is like ‘get back’ and he started shooting him, five times and killed him.”

“(One woman’s) head was pushed on the food so I had to put something on it because she didn’t want to get up. I gave her something for her head. She was stabbed in her head and her stomach.

“I have got to do something for people. I wasn’t scared for myself because I had something. He wasn’t running. He was very cruisy.”

“Please remember that the ISIS inspired terrorist is no more representative of Muslim Kiwis than the Australian white supremacist who murdered people in the Christchurch mosque attacks. This is not a religious issue. It is a terrorist issue.”

GAMAL FOUDA, IMAM OF THE AL NOOR MOSQUE, THE MAIN MOSQUE ATTACKED BY A WHITE SUPREMACIST GUNMAN IN CHRISTCHURCH ON MARCH 15, 2019:

“We are broken hearted but we are not broken again … We stand with the victims of the horrible incident.”