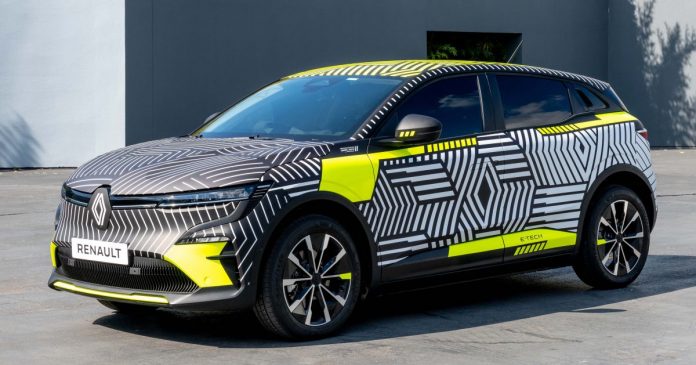 Following the initial release of teaser images last month, Renault has unveiled the Megane E-Tech Electric in pre-production guise, and based on the automaker’s CMF-EV modular platform for electric vehicles such as the Nissan Ariya.

Here, the redesigned, two-dimensional diamond logo appears as it did in the previous teaser images, albeit with the vertical lines in the headlamp and tail lamp assemblies of the Renault Megane eVision concept from last year very much reduced and more compacted in this pre-production form. The tailgate is of a similar shape to that on the eVision concept, and its roofline towards the rear end is also augmented by a spoiler.

In terms of powertrain, the Megane E-Tech Electric packs a 160 kW (217 hp) electric drive motor fed by a 60 kWh battery pack, which offers a maximum range of up to 450 km on the WLTP testing protocol. While no performance figures or charging protocol details for the Megane E-Tech Electric have been released, these figures are comparable to those of the Megane eVision concept, which was touted with a 60 kWh battery and capable of up to 130 kW DC fast charging, and a 0-100 km/h time of eight seconds.

The most comparable variant of the similarly CMF-EV platform-based Ariya is the base single-motor variant, which is rated at 215 hp and 300 Nm of torque fed by a 63 kWh battery for an identical 450 km of range, while 0-100 km/h for the Nissan is 7.5 seconds.

These pre-production units are made in the automaker’s Douai factory in France, says Renault; the fully productionised version of the Megane E-Tech Electric will debut later this year, and go on sale in 2022.