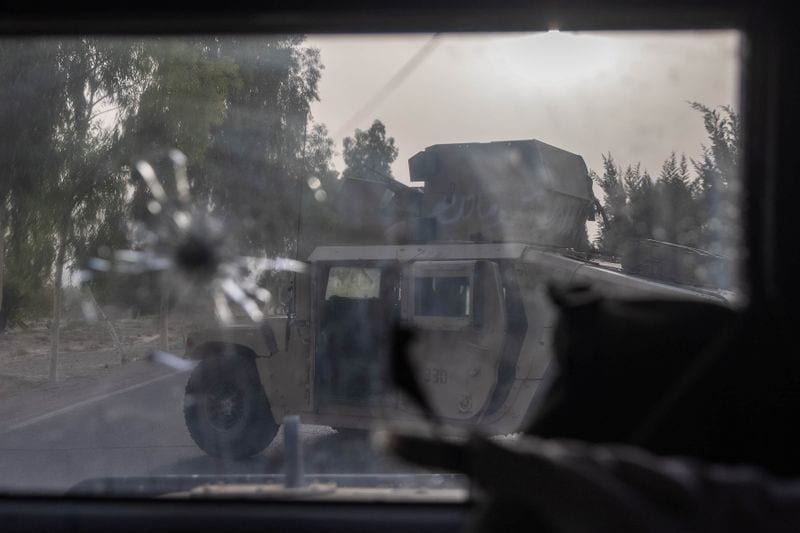 KANDAHAR, Afghanistan (Reuters) – Minutes after returning from a mission on Tuesday before dawn, a convoy of exhausted Afghan commandos were speeding back out of their base to try to extract a wounded policeman trapped by Taliban insurgents on the outskirts of Kandahar.

The previous outing had been tense but quiet. This operation in the southern city, a Taliban stronghold before the movement was ousted from power in 2001, was anything but.

As they approached the checkpoint where policeman Ahmad Shah had been holed up alone for 18 hours, some 30-40 special forces soldiers in a line of Humvees came under automatic weapons fire, according to a Reuters reporter travelling with them.

A gun battle erupted as the convoy forced its way to Shah’s position, and he was hurriedly loaded into one of the vehicles.

Then came a series of loud explosions; the first three of eight Humvees were struck by rockets and too badly damaged to continue.

In the ensuing confusion, commandos inside the disabled vehicles rushed to switch trucks. Gunfire appeared to be coming from all around; from a cemetery to the left and the heavy cover of Eucalyptus trees to the right.

A volley of bullets ricocheted off the Humvees’ metal armour. Gunners atop the Humvees swivelled wildly, aiming fire at suspected Taliban fighters who were hard to see.

The convoy accelerated away. Beside the road, a bystander – a young boy – ducked for cover.

The insurgents’ hit-and-run tactics make them a tough enemy to pin down, and, while air support from Afghan warplanes can provide cover where there are few civilians, doing so in urban areas is risky.

Soon after the commandos’ convoy left the base on Tuesday, it was held up by traffic streaming into Kandahar.

And as bullets flew during the attack just a few minutes’ drive away, the Humvees had to weave between civilians’ cars caught in the crossfire.

There were no immediate reports of deaths among the commando unit on Tuesday, and Shah, whose leg was injured in a grenade explosion, was successfully rescued.

After leaving the neighbourhood, some of the team made their way up to a hilltop police base to regroup along with Shah.

“We were 15 people (policemen), and all my comrades surrendered (to the Taliban) except me,” a visibly tired Shah told Reuters. He said he had been fighting for two days.

“I told myself that I’m not going to do that, and as long as I have a gun, why I should give up?”

Shah was to be transported back to the commandos’ main base, while other members of the unit planned to head back to try and extract the damaged Humvees and combat Taliban fighters hiding in the city.

The hilltop position afforded a sense of calm, and a serene view of the sprawling, low-rise city below. Kandahar is once again contested, along with much of the rest of Afghanistan.