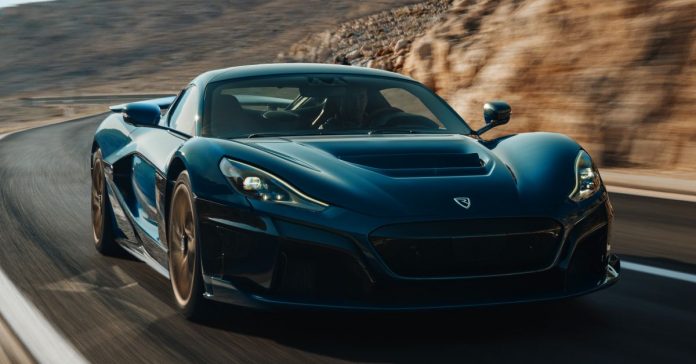 The Nevera takes its name from a “quick, unexpected and mighty Mediterranean storm,” according to Rimac, and the name also alludes to its ability to instantly change its character from comfortable grand tourer to a focus on all-out performance, said the firm.

Changes applied to the bodywork, including the intakes and diffusers of the Nevera in its present form have delivered an aerodynamic efficiency improvement of 34% over that of the early prototypes, said Rimac, attributing the gains to the refined profiles of the car’s bonnet, pillars and diffusers, splitters and radiators which now offer improved airflow and downforce. Airflow management has also been further developed to improve the cooling efficiency for both brake and powertrain systems, and the development work has resulted in a 30% improvement at low speeds and a 7% improvement at high speeds, says Rimac.

Active aero elements are also at play on the Nevera, on which the front bonnet profile, underbody flap, rear diffuser and rear wing can operate independently, with their movements controlled by complex algorithms to provide the ideal aerodynamic configuration for each driving situation. Using a ‘low drag’ mode yield a drag coefficient of 0.3, while the high-downforce mode increases downforce by 326%.

Forming the core of the Nevera is a monocoque that encompasses a bonded carbon-fibre roof, integrated structural battery pack section and rear carbon-fibre subframe that comes together as the largest single carbon-fibre piece used in the entire automotive industry, says Rimac. This weighs less than 200 kg and employs 2,200 plies of carbon-fibre along with 222 aluminium inserts, and the monocoque encases the battery to form a compact, yet strong structure that has a torsional stiffness of 70,000 Nm per degree. This strength contributes to the Nevera being able to meet strict global homologation standards, and results in the most rigid structure of any car ever made, said the Croatian hypercar maker.

The Nevera’s 120 kWh, lithium-manganese-nickel, 6960-cell battery is liquid-cooled, developed from the ground up by Rimac and contributes 37% of the car’s structural stiffness. Its positioning low and central within the car aids in its “ultra-low centre of gravity,” and results in a 48:52 front-to-rear weight distribution.

Powertrain for the Nevera consists of four bespoke, surface-mounted permanent magnet motors, each driving an individual wheel through a single-speed transmission and coming together for a total system output of 1,914 hp and 2,360 Nm of torque. These motors offer 97% efficiency, compared to the 40% attained by most internal combustion engines, and are completely maintenance-free throughout its operating life. The Rimac All-Wheel Torque Vectoring 2 (R-AWTV 2) system does the job of conventional stability and traction control systems, and can deploy “infinitely variable” dynamic responses to road and track conditions by controlling the amount of torque sent to each wheel. The system is both predictive and responsive, making more than 100 calculations per second to tailor torque outputs for the desired driving style, says Rimac.

With a motor at each wheel, torque distribution and delivery can be personalised to yield both a front- or rear-biased driveline output, enabling the selection of drive modes that allows the driver to drift the car, or employ maximum available traction, no matter how challenging the road or weather conditions, says Rimac test and development driver Miroslav Zrncevic. Slowing the Nevera from speed employs a complex braking system, says Rimac; this consists of an electro-hydrualic brake booster with a brake pedal feel simulator that distributes brake force between the conventional friction brakes and regenerative braking by the electric powertrain, which is determined by the condition of the brakes, battery and the powertrain.

For instance, deceleration will be tasked to the friction brakes if the battery is getting close to its thermal limits, or conversely it will use the motors’ regenerative braking if the friction brakes have become hot. The electric motors can provide up to 300 kW of regenerative braking, while conventional braking comes courtesy of 390 mm-diameter Brembo carbon-ceramic brake discs and six-piston calipers.

Suspension for the Nevera is handled by double wishbones all around, mated with electronically controlled dampers offering active ride height adjustment. The driver gets electric power steering in a steer-by-wire setup, which enables driver-selectable feedback depending on the drive mode selected. This additionally functions as a drive-by-wire system to demonstrate the optimum lines on a circuit when using the Driver Coach function. The Nevera offers seven drive modes; Sport mode sharpens the responses of its throttle, brakes, steering and suspension, while Drift mode sends more torque to the rear wheels for the driver to initiate and sustain oversteer when on a circuit.

Comfort mode, as the name suggests, aims to provide a relaxing ride, while Range mode aims the help the driver get the most mileage from its battery reserves. Track mode sets the Nevera to “full, unrestrained configuration” to help drivers reach the car’s full potential, while two Custom modes let drivers compile their preferred settings for various parameters.

The aforementioned Driver Coach function in the Nevera is the world’s first of its kind to employ artificial intelligence, aimed at helping drivers develop their track driving skills and extract the best possible performance from the car.

Here, the car uses 12 ultrasonic sensors, 13 cameras, six radars with the Nvidia Pegasus operating system, and it overlays data for selected racing circuits in real-time, offering clear and precise audio and visual guidance to help drivers attain the optimum racing lines, braking and acceleration points as well as steering inputs. The Driver Coach feature will be added over-the-air to delivered customer cars from 2022.

The cabin of the Nevera features three high-definition TFT screens, including one directly ahead of the passenger, and these can be configured to display as much or as little information as the driver wants, says Rimac. The layout is divided into two zones; the upper section displays “driving pleasure and performance”, while the lower section handles the infotainment system, comfort controls and driving data.

Aware of the tactile aspect in cars such as this, Rimac has commissioned billet aluminium controls and switches to provide an analogue feel, in order for the driver to peruse the onboard digital technology in a more engaging manner, the carmaker says. The Nevera’s performance with telemetry can be downloaded to a laptop or smartphone for later review, it added. Additionally, the Rimac M2M system delivers data to both Rimac itself as well as to the car’s owner. Nevera owners can receive live data such as GPS location, charging speed and battery status as well as to analyse driving performance, metrics and map review on Android and iOS mobile operating systems, while the manufacturer received anonymised performance data.

As befitting this segment of the market, Rimac says that “no two Neveras will leave the Rimac factory looking the same or bearing the same specification” thanks to its range of bespoke trim and material options. Customers can choose to specify the Nevera in GT, Signature or Timeless editions as a starting point, or take the Bespoke route for full personalisation, say the Croatian hypercar maker.

Each customer will be invited to Croatia to design their car to their exact requirements, says Rimac, and the Nevera will be available exclusively through its dealer partner network in 19 locations across Europe, North America and Latin America, the Middle East as well as in Asia.

Rocket man fights Russian demand to send him back

Serba Dinamik continues to be suspended

Why Kingpin Is The Perfect Villain For Hawkeye