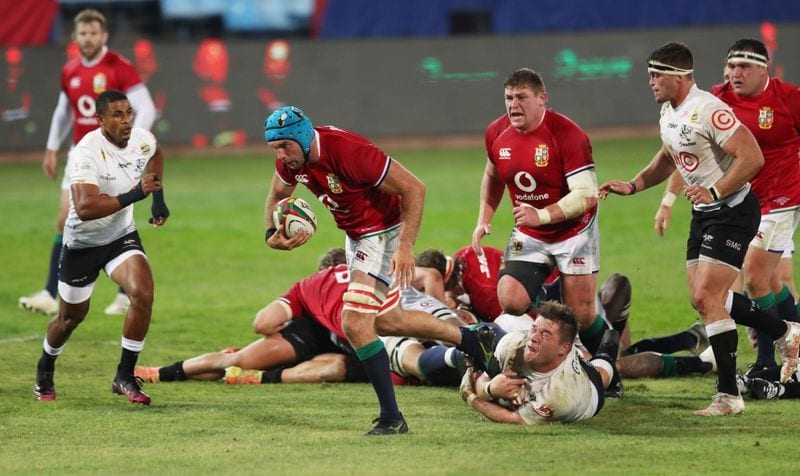 PRETORIA (Reuters) – The British & Irish Lions overcame spirited opposition to beat the Sharks 71-31 at Loftus Versfeld in Pretoria on Saturday and win the third match on their South African tour in a 16-try extravaganza.

After two easy wins, the Lions were given a first-half examination by a Sharks side, playing them for the second time in four days, and were held 26-26 at halftime.

But after Sharks scrumhalf Jaden Hendrikse was needlessly sent off early in the second half, the tourists ran away to a handsome win, outscoring the locals 11 tries to five.

The Sharks amassed a five-try haul, with two for fullback Anthony Volmink and one each for Thaakir Abrahams, Hendrikse and Werner Kok.

The Lions looked to pick up where they left off from Wednesday’s 54-7 win in Johannesburg as Harris went over for a fifth-minute try, suggesting another easy night at the office.

But when Daly spilt the ball six minutes later and Kok’s clever scoop off the floor allowed fullback Volmink to streak away for a Sharks score, it became apparent the Lions were going to get a much tougher encounter than in their opening two tour wins.

Abrahams sped away for a second Sharks try, only four minutes after that, following a superb kick through from flyhalf Lionel Cronje to put the Sharks ahead before George, captaining the tourists on the night, levelled with a push-over try.

An intercept try from Hendrikse put the Sharks back ahead after 24 minutes but Van der Merwe scored a third for the Lions two minutes later.

The Lions winger, however, then dropped a pass to allow Abrahams a clever steal and he set Volmink away for his second try. That forced the Lions to fight back again, with a try from Beirne levelling the score at halftime.

The game turned when Hendrikse used an elbow in a melee on the side of the pitch and was sent off, after a video review, to leave the Sharks a man down for the last 35 minutes.

The Lions then ran in seven tries through Conan, Daly, George, Watson (2), Beirne and Curry to re-impose their superiority and easily take the game away from the Sharks, although a charge down at the other end did allow Kok a fifth try for the South African side.