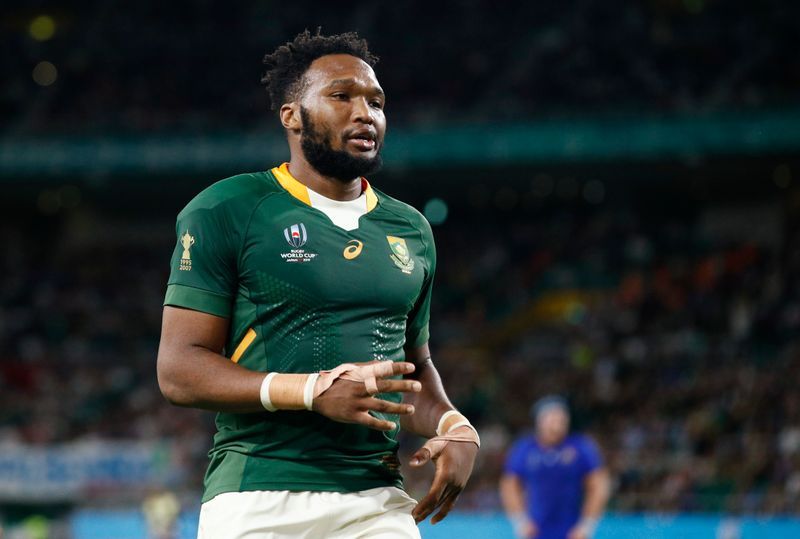 CAPE TOWN (Reuters) – South Africa World Cup winner Lukhanyo Am, who captains a shadow Springbok side against British & Irish Lions on Wednesday, says a week isolating in a hotel room was from ideal preparation for the test series but has allowed several players to get over injury.

Am was one of the key performers when they won the 2019 World Cup and has been rewarded with the captaincy of South Africa A, who will take on Lions in Cape Town on Wednesday.

He is among 18 World Cup winners in the match day squad as South Africa use the guise of the ‘A’ team to give the Springboks much needed preparation after a week cloistered in their hotel in self isolation following an outbreak of positive COVID-19 cases. Fourteen members of their 46-man squad returned positive tests.

“We couldn’t do much in six days of quarantine. In terms of physical readiness, the most we could do was stretch and basic workouts in the room but in terms of mental preparation, we did a lot of Zoom meetings, analysis and video work on the phones and laptop.

“That’s pretty much the preparations we could do but I think, on the other hand, we go into this game fresh with guys who had niggles and injury having had enough time to recover,” Am told a news conference on Tuesday.

“We’ll see where we are at tomorrow but we’ll be pushing as hard as we can.”

Wednesday’s clash at the Cape Town Stadium was originally fixtured as an opportunity for players on the fringes of the Springbok team but has now evolved into a fourth test.

South Africa had last weekend’s second warm-up test against Georgia cancelled because of the outbreak of the novel coronavirus in both camps and SA Director of Rugby Rassie Erasmus had no hesitation in naming many Springbok regulars in the A side.

Another warm-up match is being arranged for the Boks and they might play provincial opposition in curtain raiser on Saturday to the Lions clash with the Stormers, local media reported.

The three test series between the Springboks and Lions starts in Cape Town on July 24.

Hotel owners bounce back after MCO with nasi lemak business

Quick take: IHH Healthcare rises as it returns to profit