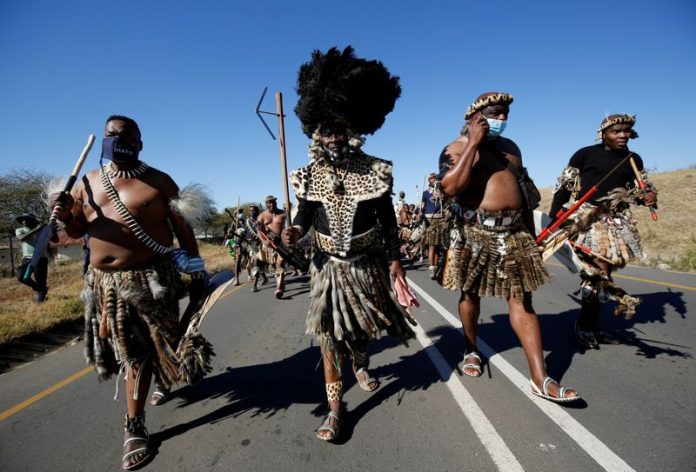 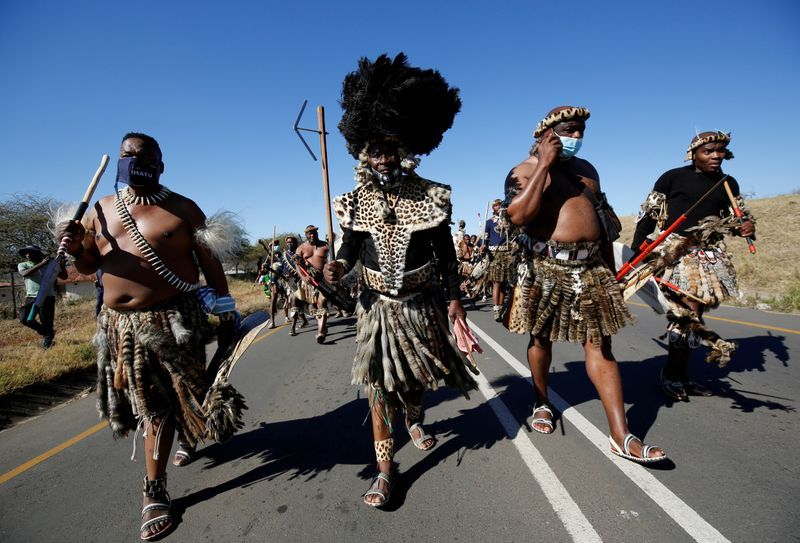 NKANDLA, South Africa (Reuters) – Hundreds of supporters of Jacob Zuma marched alongside the former South African president in his hometown of Nkandla on Saturday, a show of force against a court decision to jail him for 15 months for failing to appear at a corruption inquiry.

The constitutional court on Tuesday gave Zuma 15 months in jail for absconding in February from the inquiry led by Deputy Chief Justice Raymond Zondo. Zuma has until the end of Sunday to hand himself in, after which police are obliged to arrest him.

“They can give Zuma 15 months … or 100 months. He’s not going to serve even one day or one minute of that,” his son Edward Zuma told Reuters at the gathering. “They would have to kill me before they put their hands on him.”

The jail sentence was seen as sign of just how far Zuma, once a revered veteran of the struggle against white minority rule, has fallen since embarking on a presidency beset by multiple sleaze and graft scandals between 2009 and 2018.

His downfall has divided the ruling African National Congress, which cancelled an executive committee meeting over the weekend in order to focus on the ensuing crisis.

The ex-leader has applied to the court for the sentence to be annulled on the grounds that it is excessive and could expose him to COVID-19.

Zuma, who did not speak to his supporters but is expected to address them on Sunday, wore a black and gold tropical shirt as he walked through the crowd, but no mask. He was guarded by men dressed as traditional warriors from his Zulu nation, wearing leopard skins and holding spears with oval ox-hide shields.

In an application to annul the decision submitted on Friday, Zuma said going to jail “would put him at the highest risk of death” from the pandemic because he was nearly 80 and has a medical condition.

Zuma also called the sentence a “political statement of exemplary punishment”. He has maintained he is the victim of a political witch hunt and that Zondo is biased against him.

Zuma gave in to pressure to quit and yield to his successor, Cyril Ramaphosa, in 2018, and since then has faced several attempts to bring him to book for alleged corruption during and before his time as president.

The Zondo Commission is examining allegations that he allowed three Indian-born businessmen, the brothers Atul, Ajay and Rajesh Gupta, to plunder state resources and influence policy. He and the brothers, who fled to Dubai after Zuma’s ouster, deny wrongdoing.

Zuma also faces a separate court case relating to a $2 billion arms deal in 1999 when he was deputy president.