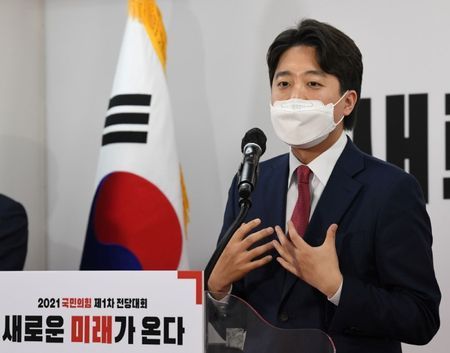 Lee Jun-seok became the youngest leader of any major political party in democratic South Korean history when he was elected to lead the conservative main opposition People Power Party on Friday.

“Our biggest task is to win the presidential election,” Lee said in an acceptance speech.

Lee promised an end to the divisive, acrimonious politics that South Koreans have known for decades.

“You might want someone as party frontrunner who can crush the Moon Jae-in administration but you can’t achieve that by defaming other candidates. If my rivals go low, I go high. If they go high, we try to go higher. That should be our rule.”

Lee, a graduate of Harvard University, has been a consultant with his party since 2011, after he founded an education smartphone app, but he has never held office.

His surprise win came as younger, centrist voters have emerged as a key block amid increasing disillusionment with what many South Koreans see as hypocritical, inept leaders.

Runaway home prices and deepening inequality have contributed to a slide in Moon’s popularity to record lows and to ruling party defeats in key mayoral elections in April.

Lee has been walking a moderate path, showing up more seasoned politicians in debates with logic and reasoned arguments while they focused on negative campaigning.

His more established rivals struggled to offer policy alternatives or shake off an old, elitist image.

Though an underdog, Lee won 43.8 percent of ballots cast online, defeating Na Kyung-won, a four-term lawmaker and floor leader, who earned 37.1 percent as runner-up. Na led Lee by a 3.5% margin in the vote among party members, which was upset by sweeping support from the public.

“His victory is a wake-up call for established politicians across the spectrum,” said Lee Tae-woo, a 35-year-old architect who perceives him as centrist.

“Lee could make a flexible approach without falling into the old ideology trap, and I just hope that senior leaders will embrace his leadership and work together to change.”