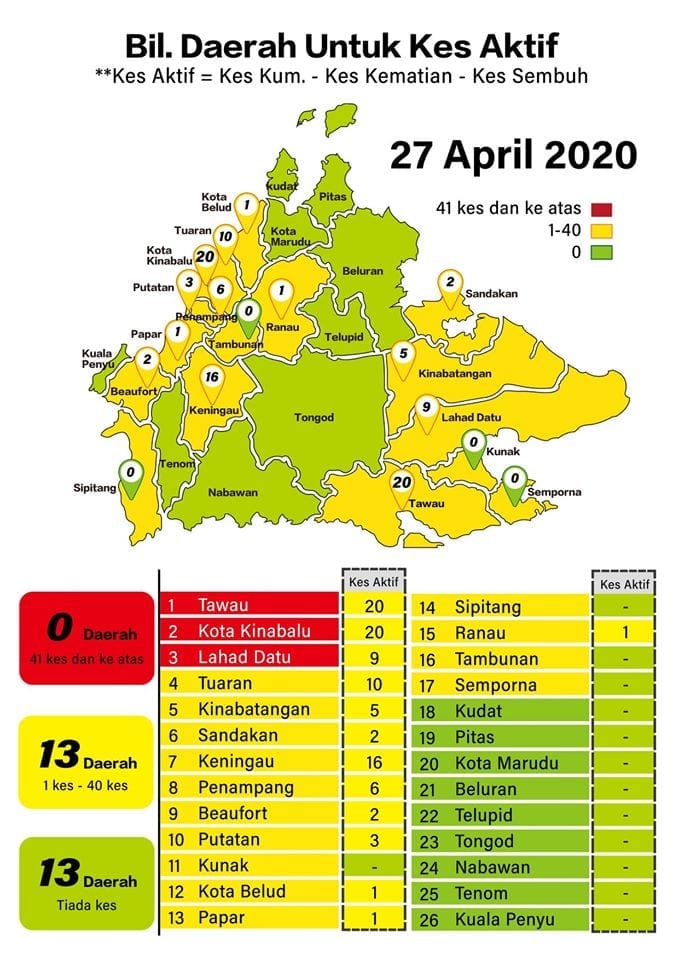 KOTA KINABALU: Sabah recorded one positive novel coronavirus (Covid-19) case yesterday, bringing the total to 312, according to the Ministry of Health.

The new case was reported in Kota Kinabalu.

Meanwhile, the total number of recoveries remained at 212.

Seven patients were readmitted for treatment, including two in Putatan and one each in Kota Kinabalu, Lahad Datu, Tuaran, Kinabatangan and Kota Belud.

Based on the number of active cases, Sabah has zero red zone (41 cases and above), 13 districts classified as yellow zone (one to 40 cases) and 13 districts as green zone (zero case).

As of Sunday, 212 patients, or about 68 percent of the 311 positive Covid-19 cases in Sabah have recovered.

Meanwhile, 95 patients were still undergoing treatment whereas the death toll remained at four as of April 26.

On the only three Covid-19 cases in Tambunan, State Health director Datuk Dr Christina Rundi said the three patients, a parent and his children, had previously travelled to West Malaysia.

“Two of the cases have recovered while one has succumbed to Covid-19 after being treated at the Intensive Care Unit for nine days.”

It has been reported that the deceased was a 66-year-old man with a medical history of diabetes, high blood pressure and kidney disease, who passed away on April 5.

Although there has been no new case reported in Tambunan since April 7, Dr Rundi said the State Health Department has continued with its prevention measures to ward off new infections in the district.

Among the activities carried out was disinfection of the Tambunan town on April 16 with the district council and Fire and Rescue department, whereas the Village Community Management Council also helped in reporting all entry of outsiders into the villages to the Tambunan District Health Office.