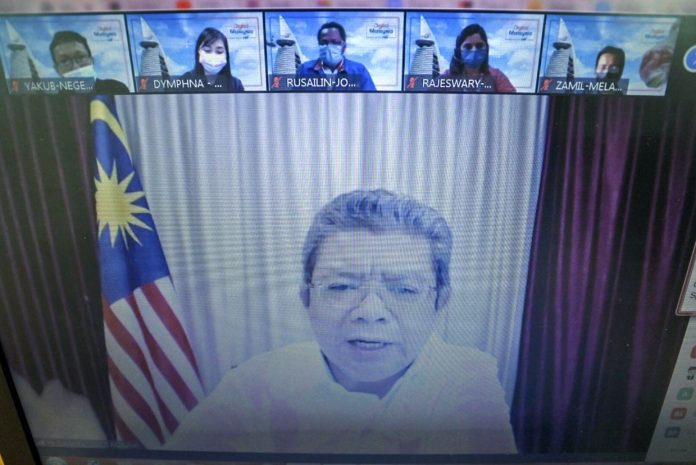 PUTRAJAYA: The implementation of the national digital infrastructure plan, Jalinan Digital Negara (​Jendela), which has entered its tenth month now, has shown encouraging results with all the quarterly targets set having been successfully achieved, said the Minister of Communications and Multimedia Datuk Saifuddin Abdullah.

Saifuddin, who chaired the Jendela Steering Committee meeting for its Phase One quarterly report for April to June 2021, said the full quarterly report was being finalised and would be announced tomorrow.

“I’m satisfied with Jendela’s implementation progress which is being closely monitored by its Implementation Committee, comprising the Malaysian Communications and Multimedia Commission (MCMC) and industry players who meet every two weeks.

“Based on this development, Jendela is expected to be able to provide a better quality of broadband service experience nationwide as well as provide high-impact benefits to the daily lives of the people,” he said in a statement today.

Saifuddin said MCMC and service providers had also presented their latest achievements, such as their efforts in ensuring more premises had fibre optic access, constructing new sites, upgrading existing transmitter stations and shutting down 3G networks by the end of December 2021.

“Also highlighted is the creation of the Jendela map, which is one of the targets for Phase 1. The map is intended as a one-stop centre for the people, which allows them to check network coverage in their area, send feedback and request new services from their respective service providers, among others.

“All feedback sent through this map will be channelled to service providers to enable them to plan services, as well as better connectivity to the people, in the future,” he said.

The minister said the report also contained information on the cost of doing business in the states for the construction of towers and roof structures, as well as efforts taken by MCMC and service providers in resolving the complaints related to connectivity.

He said the government’s recent decision to gazette telecommunications as a public utility would ensure that access to communication services could not only be provided to the people comprehensively and in high quality, but also quickly and at an affordable cost.

As such, he also called on state governments to give priority to ensuring the smooth implementation of the connectivity projects. – Bernama