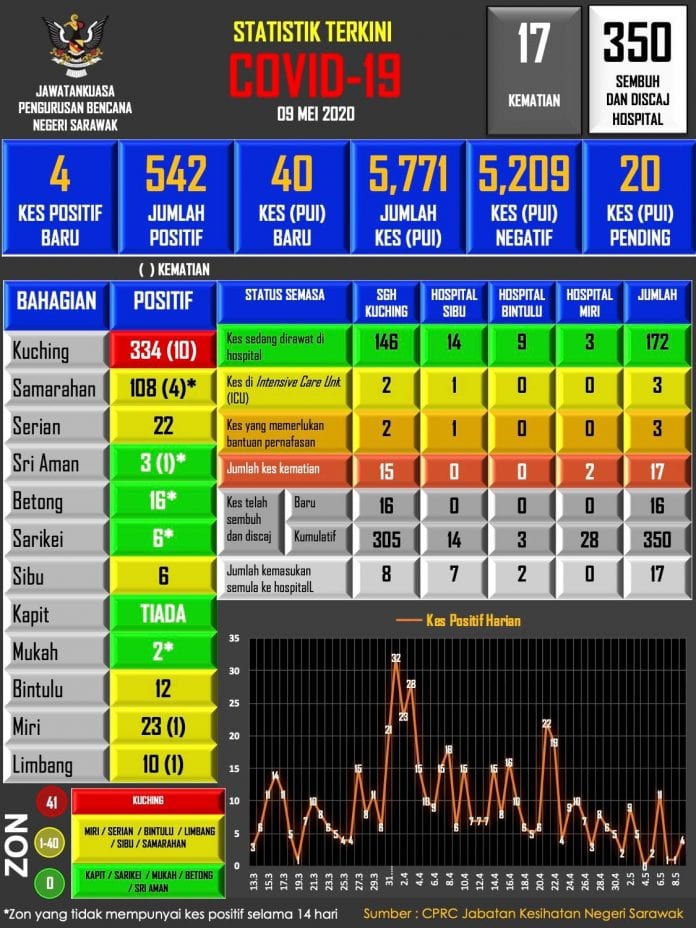 Deputy Chief Minister Datuk Amar Douglas Uggah Embas said that this brought the total number of healthcare workers who tested positive for Covid-19 in the state to 68.

“Of this total, 22 are part of the Kuching Conference cluster, while the remaining 46 are from small clusters,” he said at the Sarawak Disaster Management Committee (SDMC) Covid-19 daily update press conference yesterday.

The other two of the four new cases reported yesterday were from Tebedu. This brought the total number of positive Covid-19 cases in the state to 542 since the first positive case was reported on March 13.

Meanwhile, Kota Samarahan, which was previously a red zone, is now a yellow zone.

Uggah said the number of person under investigation (PUI) cases reported yesterday was 40, while the total number of PUIs still pending laboratory results was 20.

“One hundred and seventy-two cases (31.73 percent) are being treated in hospitals, with three cases (0.55 percent) in intensive care unit (ICU) and three (0.55 percent) requiring intubation (breathing assistance),” he said.

Uggah, who is also SDMC chairman, said 16 cases had recovered and were discharged from the Sarawak General Hospital (SGH).

“Overall, 64.58 percent of positive Covid-19 cases have recovered and returned to their respective homes,” he said.

This amounted to 350 cases.