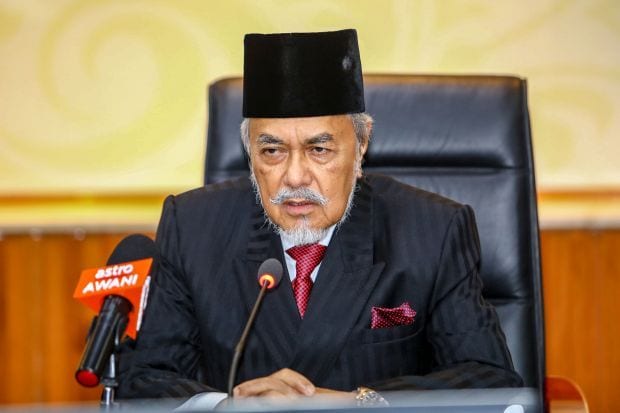 SIBU: The Sarawak State Legislative Assembly will not be dissolved on Sunday (June 6) and will continue until Aug 1,2021 due to the Emergency, says Speaker Datuk Amar Mohamad Asfia Awang Nassar(pic).

He said he would inform the Election Commission of this, adding that Section 18 of the Emergency Ordinance stipulates that it shall prevail in the event of any conflict or inconsistency between its provisions and any other written law.

“The current term of the Dewan Undangan Negeri therefore will not expire on June 6,2021. It continues to function until Aug 1,2021 which is specified in the Emergency Ordinance,” he said in a statement on Sunday.

Mohamad Asfia noted that four by-elections that should have taken place have been postponed.

He said this “conclusively proves beyond any shadow of doubt that an election or by-election cannot be held where the consent of the Yang di-Pertuan Agong is withheld,” he said.

Mohamad Asfia added that the 82 legislative assembly members and the state Cabinet Ministers would continue to perform their duties and responsibilities under the umbrella of the Emergency Ordinance.

As for remuneration for the 82 legislative assembly members, he said Section 7(a) of the Members of Administration and Members of Dewan Undangan Negeri (Remuneration, Pension and Gratuities) Ordinance 2013 provides that it will commence from the date of the coming into force of this Ordinance or from the date of appointment or election, whichever is if the latter.

The Proclamation of Emergency was issued by the Yang di-Pertuan Agong under Article 150 of the Federal Constitution on Jan 11,2021 until August 1 due to the Covid-19 pandemic.

Department pass or letter from boss will do