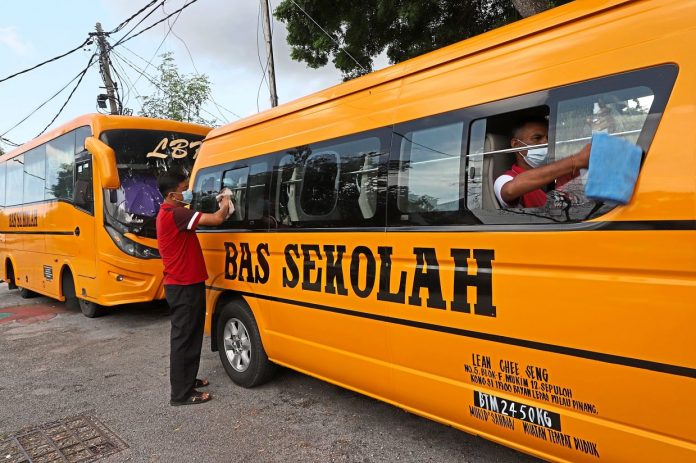 GEORGE TOWN: Schoolbus drivers here are happy that they have been included in the RM40bil Pemerkasa Plus stimulus aid package announced by the Prime Minister.

To help Malaysians weather the challenges during the lockdown, a one-off cash aid of RM500 would be given to drivers of tour vehicles, taxis, buses, and e-hailing drivers.

The aid included a RM1bil Bus and Taxi Hire Purchase Rehabilitation Scheme to allow eligible bus and taxi operators to get a loan moratorium of up to 12 months and extend the loan period up to 36 months.

Bus operator Lim Boon Kooi, 63, said the aid package was timely as all bus drivers had had a tough time since the pandemic broke out early last year.

“Some parents who lost their jobs due to the pandemic, felt the pinch in having to pay for our service and requested if we could reduce the fee.

“Based on the family’s situation, some pay half of what they normally pay and some pay only 30%.

“When schools were closed for more than four months from November last year to March this year, many parents asked if they could choose not to pay the monthly fee, ” he said.

He acknowledged that there were some families who were not impacted continued to make full payment.

But Lim, who operates a fleet of around 80 schoolbuses and vans, explained that he still had to pay the salaries of his 90 employees.

“Some drivers had to take up other jobs as the government aid wasn’t enough to support their expenses.

“I allowed my drivers to be temporary factory bus drivers as they have families to look after and their monthly commitment is high.

“We have to be understanding and practise give-and-take sometimes, ” he said.

Lim said some of his drivers became food delivery riders, but they had come to an understanding that once school reopens, they would quit their part-time jobs and return to being full-time schoolbus drivers.

Penang School Bus Association chairman Ang Beng Peong, 67, said some parents opted to drive their children to school rather than letting them take the schoolbus since the first movement control order (MCO) in March last year

“Around 20% to 30% of parents told us that they do not need our services anymore as they prefer to take their children to school themselves. Other parents lost their jobs and some asked if we could reduce the monthly fee.

“We made adjustments on a case-by-case basis.

“The fee is usually around RM100 a month but it depends on the distance, ” he added.

Ang said around 20% of schoolbus drivers had to change jobs.

Football: Soccer-Mbappe expected to be in PSG squad for Lyon clash

Rapper Coolio reprised his role for ‘Futurama’ revival before he died

How to Add a Stats Dashboard On Your WordPress Site

Liverpool 2-0 Rangers: Trent Alexander-Arnold and Mohamed Salah on target for...