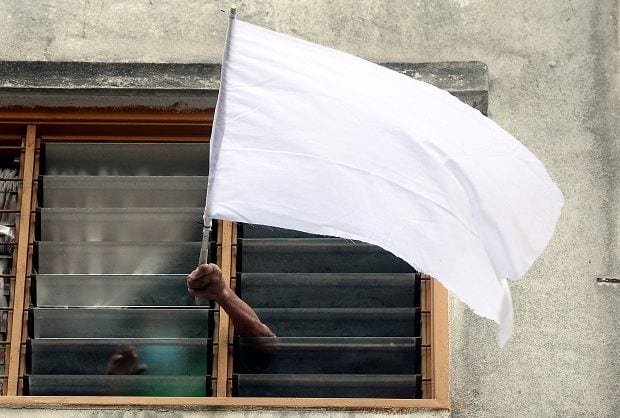 KOTA BHARU (Bernama): Feeling helpless and depressed after three days of surviving on biscuits as she had run out rice, a single mother flew a white flag in front of her house, signifying that she needed help from others in her neighbourhood.

Rohayah Che Samah, 50, said she did that as her savings were running out and in fact, she had run out of rice three days ago.

Rohayah, who lives with her youngest child, daughter Amalina Kamaraddin, 14, said since then, they had been eating biscuits and cakes donated by neighbours.

“I installed the white flag as asked to do so by my younger sister after often telling her about my problems, so that people would come to assist me.

“I actually did not know about the white flag (campaign) to seek help. Alhamdulillah (praise be to God) as after I flew the white flag, there were people coming with aid,” she said when met at her house here on Wednesday (June 30).

The mother of six said she was financially constrained as she was only depending on her small earnings from batik painting at RM2 per piece.

“The most I earn in a day is from painting seven pieces of batik and with the movement control (under the Economic Recovery Plan), there are not many pieces of cloth to be painted (with batik designs).

“My other children who are in Kuala Lumpur are unable to support me, as they have ordinary jobs and their income is also affected by the Covid-19 pandemic,” she lamented.

Rohayah, who hails from Salor, Kota Bharu, said what made it more difficult for her to receive financial aid from the authorities was that she did have an official divorce document.

Earlier, special officer to the Pengkalan Chepa Member of Parliament, Muhammad Abdul Munib Zakaria, handed over cash and food supply to Rohayah after a photo of the white flag flying in front of her house went virtal on WhatsApp and Facebook since this morning. – Bernama

Afghan peace talks should continue unless Taliban pull out -Abdullah

Badminton: Wiser for the World