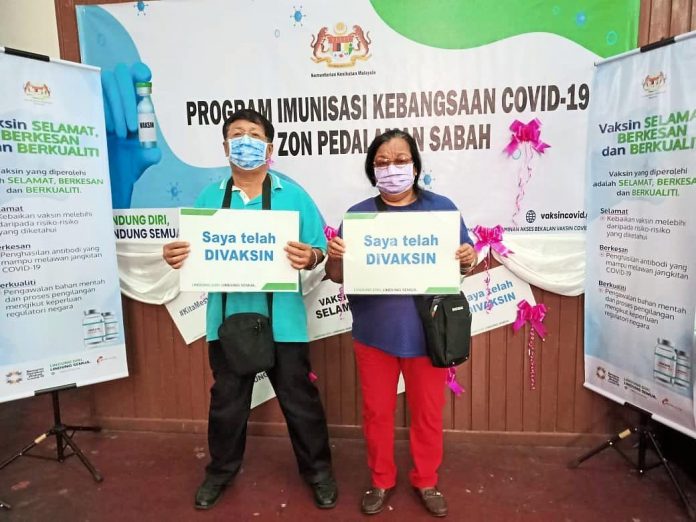 PETALING JAYA: From Kuala Lumpur to Kota Kinabalu, Malaysians who have received their Covid-19 vaccine are pleased with their experience at the vaccination centres.“Professional”, “efficient” and “smooth” are among the words they have used to describe the process.

“I chose Universiti Malaya as I studied there and am familiar with the surroundings.

“I arrived slightly earlier than my 3pm appointment but was allowed to enter,” she said.Liza was happy to find that the centre was organised and efficient.

“The personnel and volunteers on duty were helpful and friendly.

“The medical officer I spoke to even drew up a chart to help me better understand what to do and what not to do.

“Everything was done in 45 minutes, including the 15-minute observation period after getting my jab,” she added.

Liza said she was advised to keep some Panadol and antihistamine pills at home in case she experienced any side effects.

“It was good advice as I experienced chills, fever and muscle soreness for about two days but was back to my normal self after that,” she said, adding that she provided feedback on her symptoms via the MySejahtera app.

Wong Soo Moy, 76, was surprised at the speed of the vaccination process when she went to get the Sinovac vaccine at the Subang Jaya Medical Centre.

“My daughter drove me there and we arrived just before the centre opened at 8am.

“I had prepared and signed the pre-printed consent forms the night before. This helped to speed up the registration process,” she said.

The retired caregiver said the personnel and medical staff at the centre did an amazing job.

“They were very professional and helpful in terms of keeping patients at ease.

“The whole process, from registration to scheduling the second dose, took about 30 minutes.

“I left the hospital before 9am, which was much earlier than my scheduled appointment time at 9am,” she said.

Human resources consultant Normala Murat, 44, who received the AstraZeneca vaccine at the World Trade Centre, said the process went smoothly once inside the centre although it took slightly longer than expected.

There was some delay outside due to the crowd and queue jumpers.“My advice is not to go too early in order to avoid crowding outside,” she said, adding that her vaccination process took about an hour.

She also suggested that more attendants and signage be placed outside the centre.

In Kota Kinabalu, retired teacher Martin Lee, 60, and his wife Anna Fu, 61, said they got their jabs two days ago at the Keningau community hall.

“Everyone seemed happy and relaxed. There was no mad rush or anything like that,” said Lee.

The nurses and medical officers were helpful and attended to people’s questions and concerns, he added.

Similarly, 79-year-old Annie Chong, who came to the hall with her son Anthony, who is in his 50s, for the first dose of their jabs, said she was surprised at how well the vaccination programme was handled.

“We reached there just before 9am and there was already a huge crowd. But there were seats for us as we waited for our turn,” said Chong.

She said the process went smoothly, from the registration and briefing to the actual vaccination.

There have been no reports of any major hiccups or problems faced at the various vaccination centres in Sabah.

The minor issues involved brief blackouts, with the most recent one in Penampang on Saturday, when power had to be shut down from 4pm to 4.51pm due to repairs to a damaged power line.

Sabah Electricity Sdn Bhd (SESB) had assured the public that it would constantly monitor supply to all the vaccination centres statewide.

“This means that when there is power disruption, an alert will be sounded immediately so that action can be taken,” he said.

“The company is constantly working with state agencies and departments to ensure smooth power supply to all the vaccination centres statewide.”

Pope says he wants to go to Moscow to meet Putin over Ukraine –...

It was a rough ride to recovery, hallucinations and all