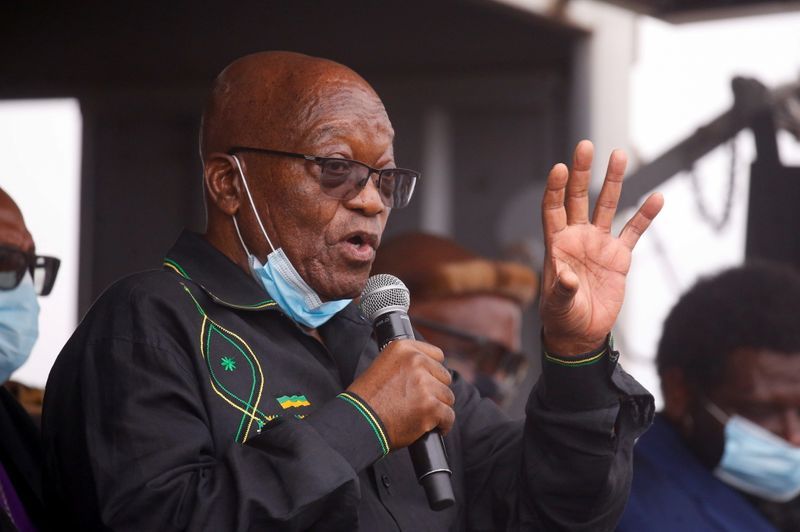 The constitutional court last Tuesday sentenced Zuma to a 15-month jail term for contempt of court after he defied an order to give evidence at a corruption inquiry in February.

The court instructed police to arrest Zuma by the end of Wednesday if he did not hand himself in, sparking an angry reaction from Zuma’s supporters and laying bare deep divisions in the governing African National Congress (ANC).

In legal arguments before the Pietermaritzburg High Court, Zuma’s lawyer on Tuesday urged it to grant the interdict, taking into account the volatile situation around Zuma’s rural home.

Hundreds of Zuma’s followers, some of them armed, gathered outside Zuma’s home on Sunday to hear him lash out against the judges that sentenced him and compared them to the white minority rulers he fought during the liberation struggle.

A lawyer for the corruption inquiry were due to argue why the interdict should not be granted later on Tuesday.

The inquiry chaired by Deputy Chief Justice Raymond Zondo is examining allegations of high-level graft during Zuma’s period in power from 2009 to 2018.

Zuma denies wrongdoing and says Zondo is biased against him.

In a letter sent to Zondo and seen by Reuters, the state attorney acting for Police Minister Bheki Cele and police commissioner Khehla Sitole said they would hold back from arresting Zuma “pending the finalisation of the litigation” or directions from Zondo.

Senior ANC official Jessie Duarte said the party was aware Zuma was exploring every legal avenue to reduce or escape his prison sentence.

“We believe the judiciary must be left to make its own decisions, (but) … we would hope that comrade Zuma’s court application will be successful,” she told a news conference.

‘Eternals’ evaluation: Marvel goes epic with an enormous step in a...