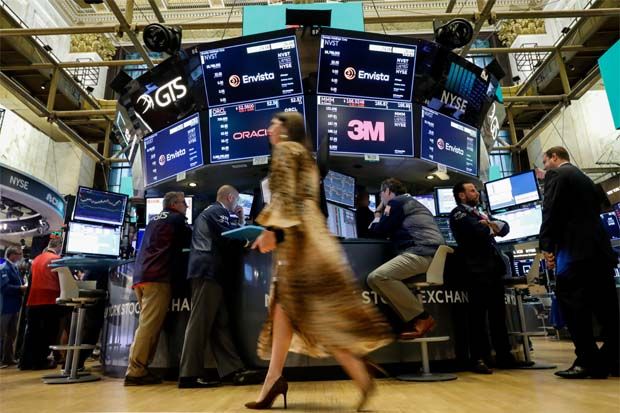 NEW YORK: The S&P 500 nabbed its fifth straight record closing high on Wednesday as investors ended the month and the quarter by largely shrugging off positive economic data and looking toward Friday’s highly anticipated employment report.

In the last session of 2021’s first half, the indexes were languid and range-bound, with the blue-chip Dow posting gains, while the Nasdaq edged lower.

All three indexes posted their fifth consecutive quarterly gains, with the S&P rising 8.2%, the Nasdaq advancing 9.5% and the Dow rising 4.6%. The S&P 500 registered its second-best first-half performance since 1998, rising 14.5%.

“It’s been a good quarter,” said Robert Pavlik, senior portfolio manager at Dakota Wealth in Fairfield, Connecticut. “As of last night’s close, the S&P has gained more than 14% year-to-date, topping the Dow and the Nasdaq. That indicates that the stock market is having a broad rally.”

For the month, the bellwether S&P 500 notched its fifth consecutive advance, while the Dow snapped its four-month winning streak to end slightly lower. The Nasdaq also gained ground in June.

This month, investor appetite shifted away from economically sensitive cyclicals in favor of growth stocks.

“Leading sectors year-to-date are what you’d expect,” Pavlik added. “Energy, financials and industrials, and that speaks to an economic environment that’s in the early stages of a cycle.”

“(Investors) started the switch back to growth (stocks) after people started to buy in to (Fed Chair Jerome) Powell’s comments that focus on transitory inflation,” Pavlik added.

“Some of the reopening trades have gotten a bit long in the tooth and that’s leading people back to growth.”

“The overall stock market continues to be on a tear, with very consistent gains for quite some time,” said Tim Ghriskey, chief investment strategist at Inverness Counsel in New York. “Valuations, while certainly high by historical standards, have been at a fairly consistent level, benefiting from the economic recovery.”

The private sector added 692, 000 jobs in June, breezing past expectations, according to payroll processor ADP. The number is 92, 000 higher than the private payroll adds economists predict from the Labor Department’s more comprehensive employment report due on Friday.

Among the 11 major sectors in the S&P, six ended the session higher, with energy enjoying the biggest percentage gain. Real estate was the day’s biggest loser.

Boeing Co gained 1.6% after Germany’s defense ministry announced it would buy five of the planemaker’s P-8A maritime control aircraft, coming on the heels of United Airlines unveiling its largest-ever order for new planes.

Walmart jumped 2.7% after announcing on Tuesday that it would start selling a prescription-only insulin analog.

Micron Technology advanced 2.5% ahead of its quarterly earnings release, but was relatively unchanged in after-hours trading following the chipmaker’s quarterly results.

Advancing issues outnumbered declining ones on the NYSE by a 1.35-to-1 ratio; on Nasdaq, a 1.19-to-1 ratio favored decliners.

Volume on U.S. exchanges was 10.85 billion shares, compared with the 11.05 billion average over the last 20 trading days.

South Korea: Why so many struggle to sleep