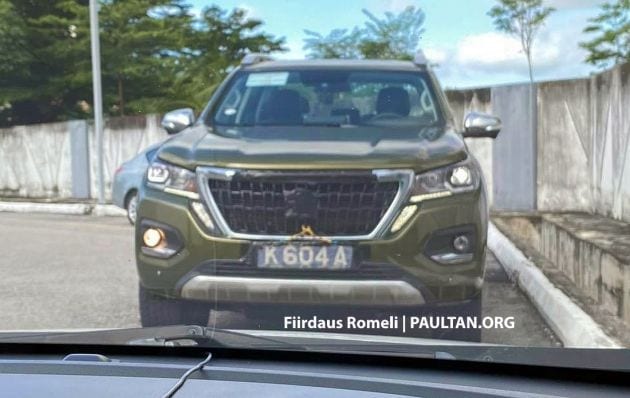 Well, here’s something that’s a bit far from home, or rather, its intended market. The face you see in the image is that of a Peugeot Landtrek, a pick-up meant to be sold in the African continent as well as Latin America.

Spotted by reader Fiirdaus Romeli, it could well be that the left-hand drive, multi-purpose example is in the country to evaluate the truck’s performance in tropical conditions, with an eye on gauging its suitability for the region somewhere down the road.

The Landtrek – unveiled earlier this year and set to go on sale in the above markets at the end of 2020 – is the French automaker’s second offering in the segment. Based on the Changan Kaicheng F70 that was introduced last year, the truck will be offered in chassis cab, single-cab and double-cab body styles.

Externally, the Peugeot pick-up features a face with the brand’s current styling codes, with a vertical grille featuring the lion in the centre and also vertical LED light signatures. Otherwise, it looks like everything else in the segment.

The interior, however, isn’t utilitarian. A lot of effort has gone into making the Landtrek’s cabin car-like, from a dashboard inspired by the brand’s 508 sedan and a sporty two-spoke steering wheel to automatic dual-zone air conditioning and a 10-inch high-definition touchscreen infotainment system with a 10 GB hard drive and Apple CarPlay/Android Auto connectivity.

On the safety front, available kit includes six airbags, ESP, hill descent control, ASR on both 4×2 and 4×4 versions, lane departure warning, trailer swing control and two Isofix attachment points on the rear seats. The truck can also be specified with up to four cameras to facilitate manoeuvring both in town and on the road.

Vlog with Proton contest offers up to RM80,000 in monthly cash prizes – create,...

Banking at your fingertips made straightforward through CIMB Clicks