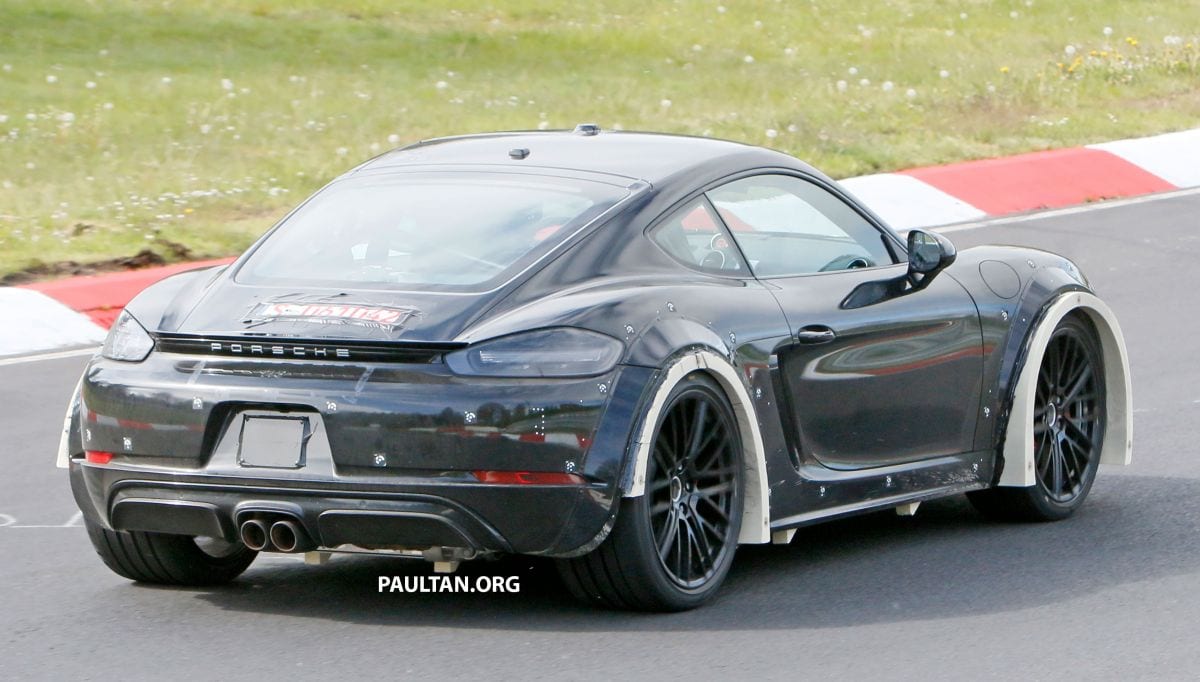 Here’s a cryptic one. Our spy photographer source has photographed what appears to be a wide-body development mule taking the form of a Porsche Cayman, albeit with slabs of foam inserted into its wheel arches, as part of bodywork that is otherwise of a standard 718 Cayman.

The exterior of the vehicle here appears to be clothed in 718 Cayman GTS front and rear bodywork, where the front bumper wears the larger corner intakes, while the rear bumper incorporates the twin central exhaust outlets of the pre-facelift car’s turbocharged 2.5 litre boxer-four engine, as opposed to the distanced exhaust exits of the naturally aspirated 4.0 litre facelift car.

The extended wheel arches indicate wider front and rear tracks and therefore a broader footprint, which could point to development work for the next-generation Cayman. This, along with the Boxster, could eventually be hybrid or even fully electric, which Porsche has been indicated to be considering back in April 2019. The actual powertrain used in this particular car is harder to guess here, as our spy photographer could not identify the Cayman mule’s sound due to a loud, nearby passing vehicle at the time. That said, this would probably not be a electric vehicle, as both hybrid and fully electric development cars have historically been denoted by “Electric Test Vehicle” stickers, or others of similar description.

Porsche 718 model line chief Frank-Steffen Walliser has previously defended the decision to offer four-cylinder powertrains in the mid-engine sports car range, which has helped the brand reach number one in the China market and compensate for other markets.

In terms of fully electric models, Walliser said at the time that Porsche “can do a very, very good electric sports car, but I do not intend to do an electric 911,” effectively ruling out that model and possibly leaving room for pure EV versions of the 718 model range.

Rugby: Rugby-England to host Tonga as part of November tests

United Nations set to call for halt of arms to Myanmar: diplomats

China Will Avoid Decoupling With the West, Xi Jinping Says