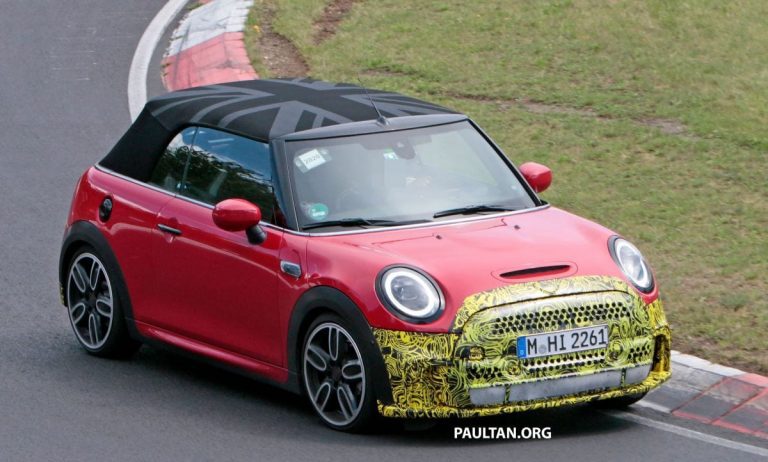 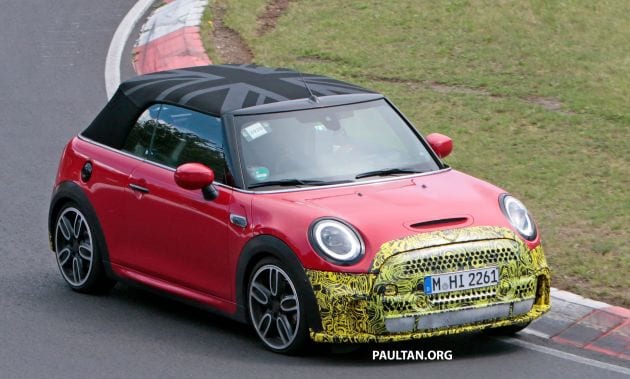 Spotted by our spy photographers at the Nürburgring Nordschleife is the 2021 facelift of the MINI Cooper S Convertible, which indicates that the coming revision to the compact ragtop will serve as another update before an all-new model is unveiled.

Changes appear to be sparing, with the indicative camouflage foil applied to the front bumper, grille, and the leading edge of the bonnet. This possibly accommodates a larger grille design when undisguised production examples emerge, accompanied by what are likely to be larger air intakes within the front bumper.

Appearing to be unchanged are the headlamps and most of the car’s bodywork, and the fabric roof with the monochrome Union Jack also looks to be carried over for this update. At the back, the full-LED tail lamps with Union Jack styling remain, and like the front end, the rear bumper has also been revised, with chunkier diffuser sculpting which appears to have required the change to a single central foglamp. 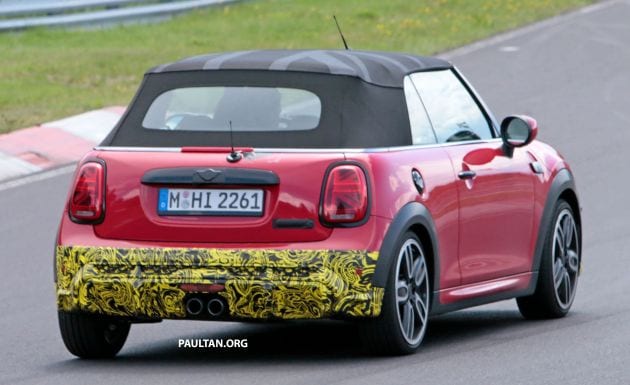 Images of the revised car’s interior should surface in due time, though the five-inch digital instrument panel from the John Cooper Works GP and the Cooper SE is expected here on the revised Cooper S Convertible as well, likely joined by an 8.8-inch touchscreen display in higher trim levels.

Under that central airscoop-adorned bonnet is likely to be the same 2.0 litre turbocharged inline-four-cylinder petrol unit, which produces 192 hp and 280 Nm of torque in current Cooper S form. The popular choice of transmission should be the seven-speed Steptronic dual-clutch gearbox driving the front wheels in the current model, where a six-speed manual was offered as standard.

Thus equipped, the current F57 Cooper S Convertible was rated for a 0-100 km/h time of 7.1 seconds, with a top speed of 230 km/h, and the same performance levels can be expected for this update. No hints of the refreshed Cooper S Convertible’s arrival date so far, though given the minor changes visible, it could be on track for a debut later this year.