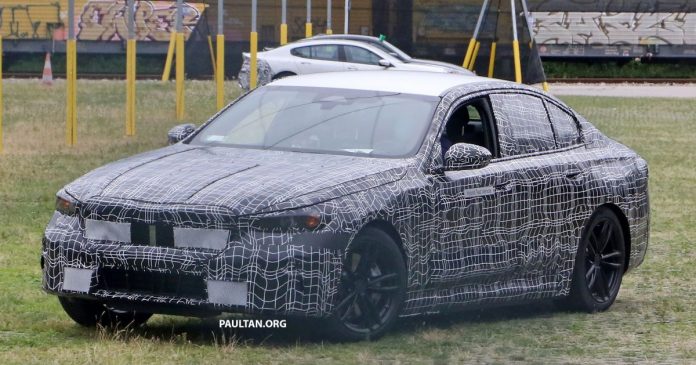 The successor to the G30 5 Series is expected to take after the next-gen 7 Series flagship stablemate in employing three types of powertrain; pure electric drive, hybrid and internal combustion, according to our sources. The fully electric version has been tipped to be called the i5 as the pure EV nomenclature for a sedan model in the German marque’s fully electric range, rather than a larger fastback sibling to the i3.

At first glance shows the G60 5 Series camouflage shroud to indicate a relatively traditional kidney grille as currently seen on the G30, though a closer look at the lower section partly reveals vertical elements that could point to a full-height grille in the works, as seen on the G22 4 Series Coupe and G24 Gran Coupe, as well as the M3/M4 high performance duo.

The fully electric G60-generation 5 Series could adopt its powertrain from the BMW iX, likely in the electric crossover’s xDrive40 variant’s form that is comprised of a 190 kW (258 PS) front motor and a 200 kW (272 PS) rear motor for a total system output of 326 PS and 630 Nm of torque.

That also brings the possibility of using the iX’s higher-spec 523 PS/765 Nm xDrive50 powertrain, which offers a 0-100 km/h time of 4.6 seconds in the iX. While the xDrive40 version of the iX powertrain employs a 71 kWh lithium-ion battery pack, the more potent xDrive50 variant gets a larger unit with 105.2 kWh of capacity, offering 630 km of range from a full charge in the iX.

The iX will gain a 600 PS M Performance variant later on, and by extension, the electric 5 Series stands to benefit from the crossover’s even more heightened performance as well.

The initial set of images so far just show the development cars’ exterior, though an earlier sighting of the next-generation 7 Series has revealed that the automaker will be taking a marked step change in interior design for its flagship sedan, and so the same direction can be expected for this G60 5 Series that will debut only later on. For now, that premiere date is rumoured to be some time in 2023 as a 2024 model.

Football: Soccer-Arsenal’s Arteta was at his ‘lowest’ after Man City defeat