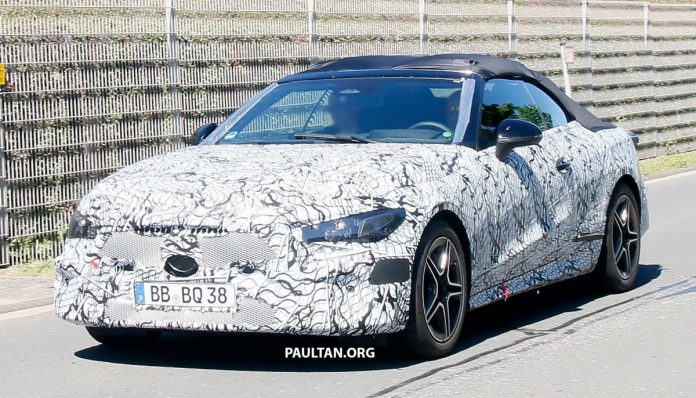 With the latest W206-generation Mercedes-Benz C-Class sedan and estate having made its debut in February this year, two-door versions of the model line are in the works, and the latest to emerge is the C-Class Cabriolet. Likely to wear the A206 model code in succession of the current A205 C-Class Cabriolet, much of the bodywork remains shrouded, though certain part such as the headlamps can be seen.

These headlamps appear to be of a similar shape to those on the W206 sedan, and bookend a grille that remains concealed but partly revealing the tristar in the centre, as on the sedan. The front bumper remains covered, however its final forms can be expected to accentuate the car’s visual width.

Each door on the A206 Cabriolet can be seen wearing a character line that echoes that of the W206 sedan, as well as with exterior door handles of a similar fashion. Up top, the Cabriolet continues to use a fabric roof arrangement. Bearing in mind this is an early sighting of a development car, the bootlid of this A206 appears to wear a sharper edge than that of the current A205. The tail lamps here are temporary items that don’t give away the shape of the final product, though the eventual car can be expected to play a variation on the shape of that used on the sedan, which tapers inboard to acute edges. Exhausts are hidden behind the rear bumper, and will likely remain so for production, as with the sedan.

Powertrain choices for the A206 is expected to echo those of the W206 sedan, in which the engine line-up is now resolutely four-cylinder. A near certainty will be the C300 variant with the M254 2.0litre turbo inline-four petrol, that outputs 255 hp and 400 Nm through a nine-speed automatic in the W206 sedan.

Petrols and diesels are offered on the sedan and the same is expected for the two-door versions of the C-Class, along with the latest iteration of EQ Boost mild-hybrid drive assistance through a 48-volt system and integrated starter generator.

More future sightings of the A206 Mercedes-Benz C-Class Cabriolet can be expected, and with this particular unit photographed by our sources near the Nurburgring, one can expect images of circuit testing for the open-air C-Class in the future.

Video Shows Toddler ‘Asking’ Airport Security If She Can Go Say Goodbye To Her...