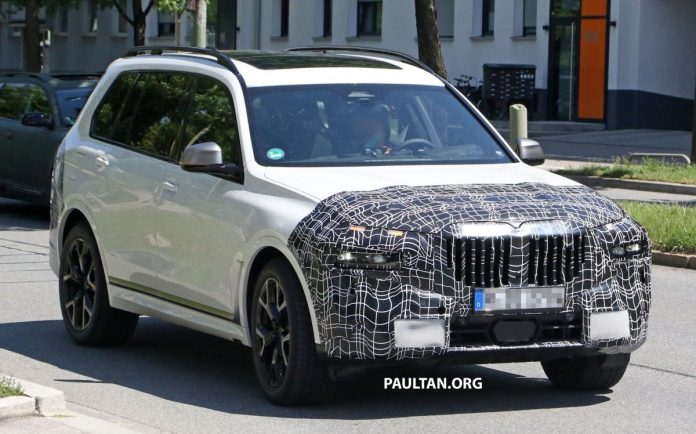 The BMW X7 facelift has been sighted in public once again, and this time we get a better view of the revised model that can be seen to feature a new, split-arrangement set of headlamps.

Here, the slimmer of the two elements is on top, which will be the LED daytime running lights while the lower assembly will be the main headlamps, which will sit lower than it does on the current X7 relative to the grille. A similar arrangement has been sighted for the next-generation 7 Series flagship sedan, as well as on the forthcoming X8.

One aspect that remains a constant is the assertiveness of its grille, which could receive some mild changes but otherwise would remain similar in overall shape and size as on the current model. Revisions to the rear end of the X7 facelift would appear to be relatively less radical that those applied to its sharp end. As par for the mid-lifecycle update course, the rear lights are of an updated design, along with a redesigned rear bumper. The exhaust outlets on this particular development unit appear to be of a merged twin-pipe design.

The interior of this X7 LCI has yet to be photographed at this sighting, though certain elements can be expected, such as the curved dual widescreen display for driver instrumentation and for infotainment, as seen on the next-generation 7 Series which itself draws from the iX electric SUV, according to our sources.

Also ripe for updating is the X7’s powertrain line-up, which is currently comprised of the 3.0 litre inline-six and 4.4 litre V8 engines. One possible candidate could be the electrified 3.0 litre inline-six that is bound for the next 7 Series. These, in addition to possible updates to the interior are expected for the X7 LCI, which could be set for debut for 2022.

Driving: More 50mph zones on the way for Welsh roads?