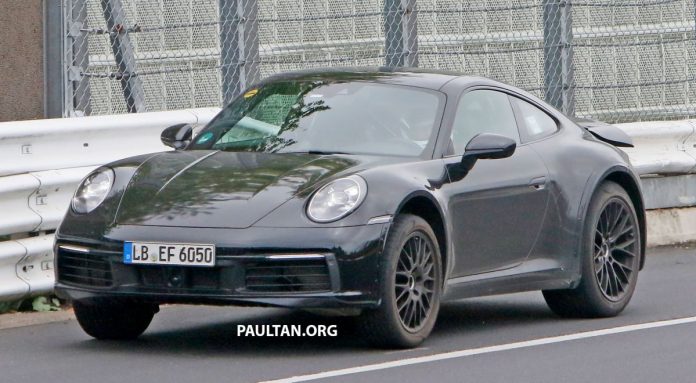 The lifted Porsche 911, dubbed ‘Safari’ has been sighted on test once again, this time on the tarmac of the European performance testing favourite that is the Nurburgring in Germany.

The ride height on the development unit remains relatively tall when driven on the racetrack surface, and the subtle wheelarch extensions offer more clearance for the tyres here which have taller sidewalls.

Bodywork on the ‘Safari’ development car here continues to be based on the mainstream Carrera range, though the lower front end of this unit can be seen the feature a spitter that has had its central section carved out, likely to offered an improved approach angle on steep slopes. As before, the rear end of the ‘Safari’ car wears the Sport Design-style bumper with the higher license plate mount. The adaptation of the Carrera body also suggests a Carrera range-based powertrain, most likely to feature a version of the Carrera 4S powertrain that includes all-wheel-drive to maximise traction on the loose surfaces that the ‘Safari’ version is likely to encounter more often than its standard or lowered ride height siblings.

Motive power would therefore likely be from the 3.0 litre turbocharged, horizontally-opposed six-cylinder engine from the Carrera that produces 450 PS at 6,500 rpm ad 530 Nm of torque from 2,500 rpm to 5,000 rpm, sent through an eight-speed dual-clutch automatic to all four wheels. The more potent version of the same powertrain is also possible from the 911 GTS range, where it produces 480 PS and 570 Nm of torque.

Another rendition of the off-roading Neunelfer theme has been produced by Singer Vehicle Design, which unveiled its All-terrain Competition Study (ACS) at the beginning of this year, though the California-based outfit of ‘restomodded’ air-cooled Porsche 911 fame had been asked by Porsche to remove all media of the ACS from its website for intellectual property reasons.

That said, German outfit Ruf offered its own take on the off-roading rear-engined sports car theme last year, with the Rodeo Concept that has been designed to accommodate either natural aspiration or turbocharging. Unlike Singer Vehicle Design, the Pfaffenhausen outfit faces no naming disputes with Porsche as it has been recognised by the German department of transport as a manufacturer in its own right since 1981.