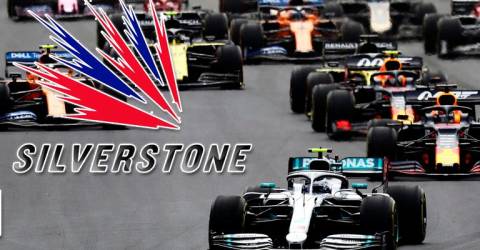 SILVERSTONE: Some statistics for Sunday’s British Formula One Grand Prix at Silverstone, the fourth race of the 2020 season:

Sunday’s race will be the 71st British Grand Prix.

Hamilton is chasing a record-extending seventh British win. he has also been on pole six times at Silverstone.

Pole is not a significant advantage, historically. But every winner has started from fourth or higher since 2000.

The British Grand Prix, with Italy, is one of two ever-present races on the calendar since 1950. This year’s race will be the 54th at Silverstone.

Silverstone is the third longest track in F1, after Spa and Azerbaijan’s Baku circuit. The circuit celebrates the 70th anniversary of hosting the first world championship race.

Hamilton has 86 victories from 253 starts and is now five short of Schumacher’s record 91. Ferrari’s Sebastian Vettel is the next closest active driver on 53.

Hamilton is going for his third victory in a row after winning the Styrian and Hungarian Grands Prix.

He has taken 52 of his wins from pole position.

Hamilton has a record 90 career poles.

All of the 10 teams except Williams have scored points this season.

Only two teams – Mercedes and McLaren – have finished every race so far this season with both cars.

Badminton: Too much to handle – Hendrawan reveals why his podium plan was disrupted